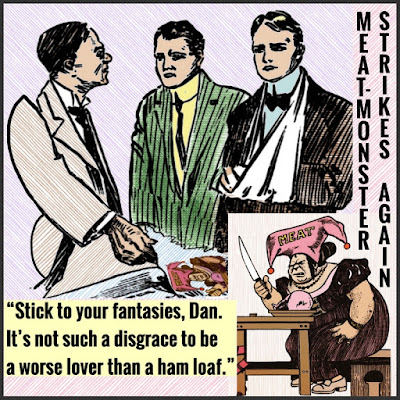 First, my hat's off to this wonderful counselor on staff at the police department. Very few men would do what this good man did in empathizing with a man both down on his luck and feeling the bitter remorse any man feels when his libido and love-making prowess has been not only been criticized but attacked. If I were younger I would love to snag a counseling job like this, except with the bad luck I've been going through there would probably never be a case involving a Meat Monster and her brutal proclivities raging in a murderous hormone-crazed spree. Rotten luck.

The police counselor, seeing Dan’s arm injured and in a cast and godawful sling, literally and admirably dislocated his own arm from the socket and sat there while sadistic attendants pulled it completely out of place. Think of the pain he suppressed while remaining so easy going just to be a comfort to his fellow man. I’ll tell you right upfront I’d never be able to do that, but one time I was similarly generous when another kid didn’t get a May basket and I gave him one of mine. So I hope I can still be proud?

OK, the Meat Monster woman killed the other guy yesterday because his lovemaking skills didn't rise to match those of a ham loaf. Then the very next day she challenges this other guy with the same terms. Right away I would’ve said he had the advantage. The meat loaf by then was certainly worn and disheveled from its prior exertions. But whether Dan was afraid when he found himself in the pinch or assumed the ham loaf had its full manhood still (I didn't pry beyond the preliminaries to avoid embarrassment), it didn’t go well.

Part of it must have been the Meat Monster’s expectations were high. She knew the loaf was strung out, two days in a row being a real challenge for that grade of loaf. Plus, having killed Glen, she had a rush of progesterone and testosterone giving a greater natural sense of beauty and desirability. And I probably shouldn’t say it, but that type of chick's always horny. Dan saw the problem and was immediately limp as a noodle, as most guys would be. The guys who would naturally be most attracted to her would be mostly bodybuilders hopped up on body- and mind-altering chemicals. The hat freaks us out.

It’s funny, though, about Dan’s focus, his spirits being low, etc., so bad that even the police detective had to counsel him. "I mean, it’s stupid. You escaped the Meat Monster with no more than a broken arm and your ego's still bruised!? Give me a break." The detective spelled it out nicely, "'It was you against a ham loaf and you lost. Stick to your fantasies, Dan. It’s not such a disgrace to be a worse lover than a ham loaf." Since then Dan has regained his self-confidence through well-measured self-abuse. Hope his arm doesn't hurt too much.

As for me, I'm halfway tempted to look for a woman and see if I’m better than a ham loaf. But I better not.
Posted by dbkundalini at 9:09 AM