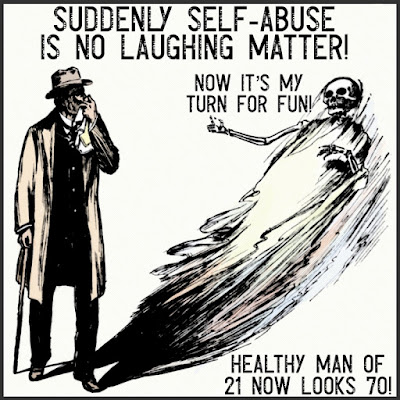 It’s hard to believe we’re virtually through with Self-Abuse September! But time goes fast when we're having fun. And time, like all things that come, always have to go; at least they usually do, and when they don’t they let you know about it.

That’s not your cackling mother or grandmother, girlfriend, boyfriend, husband, or wife in the graphic. That’s your own traitorous mind talking. With a sometimes happy interplay of body parts that, I believe, shows some of the magic of life. And think of this, what rich discernment you have, to have a problem and simultaneously know the perfect solution. They can’t teach that in medical school, because it wells up from within, and that's the beauty of nature.

On the other hand, mortality’s always with you. The whole thing about sex and mortality is an interesting study. Where else can you go for such a quick lesson in biological imperatives? You think you’re independent and free, with a pure mind, all that, but it’s obvious you’re bound and held by chains of many stripes. That’s why they came up with chastity belts and other associated devices. Because life’s a burgeoning thing, and if you don’t let it burgeon it’ll bludgeon you till you do!

The focus today, though, appears to be on life and death. If you’re old, really old, a lot of the imperative is gone out of self-abuse. You could call it an erective elective, not good for anything in particular but not causing any harm. But because your eyes are no good, you need the large-print everything, or just a really vivid imagination, replete with Bette Page, Mae West, and maybe Frank N. Furter, mentioned just to cover the spread.

But do you care about death? Nah, why should you! It’ll get here when it gets here. It’s an imperative too, but not everyone follows it’s wheedling and pleas. Finally it puts its foot down and says enough’s enough, come with me. But until then, you can stare up at it and say, “I adjure you in the matchless name of Biology, stand back, fiend, and pass me that toilet paper!”

Death takes a backseat to no one, of course, but neither should you. It’s hard enough to move around the house, let alone trying to nail someone in the backseat as in days of old. Try to unholster the damned thing as in days of old, squeaking your bottom on the vinyl seats, or catching the roughness of the cloth bits, you’ll see unholstering thwarted nastily by upholstery. Which is a quandary when her moods have about a three minute lifespan.

The best way of handling mortality is with more -tality! If the tale of the tail is left untold you've done no good. You only do good when you take life by the hand and prove its worth time after time. Your fate can always wait. As it turns out, your life’s in your own hands, the morning calls — “Cock-a-doodle-do!” — and the night will come when it gets here.
Posted by dbkundalini at 6:00 AM