You Gotta Hold On 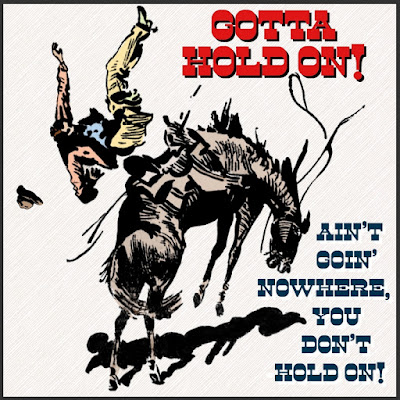 I seriously don’t think we have any newbies here. Raise your hands, if they’re not already occupied, if you’re a newbie. Seeing none, I'm assuming two things: they're otherwise occupied and so not newbies.

OK, then, since we’ve all been around the block enough times to map out the entire city, the lessons of this post might not be the lessons you need to learn. However, if you’ve been around the block that many times, that could also be said for everything else here. You’re merely reading to be able to say such things as, “Amen,” “Yes, I’ve been there,” and “Riding a horse like that is bad for all living creatures and their crotches.” Why cowboys do it, no one knows. The best guess is it has to do with attracting partners, but if there’s an injury there’s only nostalgia to take the place of actual practice. Once I was a stallion, once I was a bull, now I’m retired, waiting for the cure to foolish rodeo injuries.”

As worthless as rodeos are in fact, they do serve as an educational tool for teaching what not to do in life. And for that we salute those brave foolhardy souls who take part in those cow-infested displays, tipping a hat to them for what they teach. One of the big lessons you see here immediately. If you strap a leather belt around a horse’s sac it’s going to jump with all the craziness and force of a horse with a leather belt around its sac. Which comes first, it’s no mystery. The sac’s there, the belt's a foreign addition, the jumping’s a violent anguished reaction. Anytime anyone tells you the bull likes it, that’s a guy to depants and let him try it. If he doesn’t literally kick you to death, we’ll refund your money.

The interesting thing about rodeo cowboys (based on confidential interviews made when they’re drunk and missing their mothers) is that they don’t really enjoy the whole racket. I might be working on a rodeo series so I don’t want to empty the entire portfolio, but they have feelings like the rest of us. To me that was a “Who knew?” moment. The less said, the better, I know, but we went out in a field for a cleansing ritual of self-abuse and were virtually stampeded by angry bulls. This is no joke. Once we were safely back to the fence, those bulls circled slowly the spot of our reverie as if in some cleaning ritual, then built up speed, around and around, until they literally turned into melted butter right on the spot. It was like a mystical moment and I spent the next hour throwing butter over my head and hooting and hollering. A prophet appeared and said not to tell a living soul, an injunction I’ve diligently kept.

That cowboy and I became friends for life. I’ve even dedicated some episodes of self-abuse to him, the more meaningful times -- Christmas, Easter, etc. -- and he’s been blessed by that. Whether he’s ever dedicated any to me, he hasn’t said. Cowboys like warriors don’t always talk about their experiences, defeats or conquests. And that’s why they always die young, they're too stoved up with pride and/or sorrow to let go. They feel the end coming on, but instead of breaking the spell, like Jimi Hendrix* they ride the alpha jerk field into oblivion.

*In a 1970s film about Hendrix, some guys speculating what his death was like.
Posted by dbkundalini at 6:00 AM