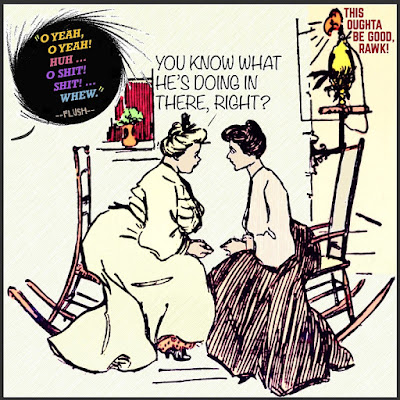 What we have here is a fairly common situation, the old clash of cultures, when inevitably they somehow get wise to the wiles of guys. But O! the innocent ways of women at first, till Aunt Bea meets Little House on the Prairie, with a male house-guest rawdoggin’ it with reckless abandon in the john, blissfully oblivious in his reverie, with an understanding bird out yonder somehow hip to it and gauging the situation at hand, its impact on the ladies, she who's wise and she who's still playing catch-up.

I’m glad I wasn't there, because I’m frankly a little embarrassed about the guy. This isn't just reverie, for the guy’s full-throated cries of unbridled ecstasy strike me as overtly uncivil and reckless. He surely knows the more demure qualities of those particular ladies by day, given as they are to the old world ways of fashion and society, obviously not the ways of the barnyard, the roosters' full-throated crowing, then grabbing a hen by the scruff of the neck. Yes, I'm all for a guy having a good time, but some of these gals deserve to be left in the dark.

True, I get it that he’s excited. But as an obviously older and more experienced man, with the stereotypical cries of climax in his stock vocabulary, he surely has more than an inkling when these cries more rightly come into play -- in the privacy of the barn with a ripe filly -- not while Aunt Bea holds forth on the stitching of doilies or some such. I’m old-fashioned like that, believing that, yes, everyone’s trying to get off any way he can, and with Tarzan swinging through the jungle holding on to swinging stalks such cries are de rigueur, but in polite society, please come quietly with your pinky out, return to your coffee and tell Bea nicely, “Thank you for the use of your nice facilities. I didn't do anything I shouldn't have done, if that's what you're thinking. Then I tidied up after myself as I once learned the routine in third grade hygiene.”

But as for the “stock vocabulary” I mentioned, isn’t it curious how simple and vulgar it is while also conveying perfectly the excitement of being at this monumental edge, knowing that you’ve reached a point of no return and what is to come -- no vulgarity intended -- both fully natural and expected and yet a crisis of sorts? In reproduction it accompanies the desire for depth, for planting, for the rich assurance that you’re wringing out all you can wring at that moment in fulfillment of the biological imperative. “I am the man of the hour. If I don’t single-handedly repopulate the earth, all bets are off concerning our survival as a species.” Of course his leisurely reenactment doesn’t repopulate squat, but it’s pleasurable, akin to the saying, “It’s the thought that counts.”

But is he appropriately thoughtful? How completely immersed would you have to be to be totally oblivious to the very recent memory that you were just a guest in this lady’s home and have only moments before excused yourself -- without any explanation as to what you were going to do? If they had wondered, and when I’m in social situations I for one am always watching and wondering who’s sneaking off to do what, they would’ve assumed he was going to pee. Because the biological imperative is rarely part of a neighborly get-together for tea, beyond dispute. Yes, anytime an orgy breaks out, whip it out, what else can you do? Clearly that wasn't the case here.
Posted by dbkundalini at 6:00 AM