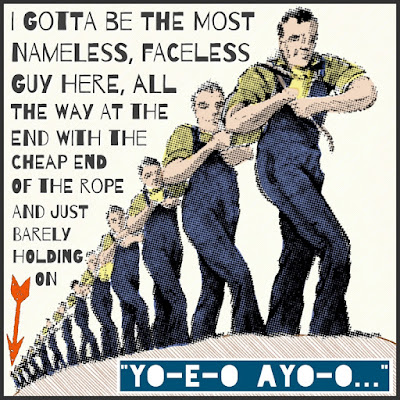 It's painful to remember one of my early jobs, actually for a major manufacturing company, appliances. A long time ago someone invented the appliance, it caught on with the public, and naturally then they had to make them. And as far as I know they're still being produced to this very day. Along with the group activities meant for company pride and solidarity. Heave ho!

Yes, there was more to the factory that just assembly lines, warehouses, and stacks of parts. There were these team-working exercises -- varying in description -- that have stayed with me all these years. I bet I think of them every month or so. I'll be burning a little incense, the lights are dimmed or I have a candle, my hands are on my lap, my eyes closed, with a chunk of rope at the ready to tug on and maybe smack the wall. That alone refreshes my mind, I'm renewed, restored, rejuvenated and retired, since I usually fall asleep pretty quickly.

But we couldn't fall asleep on the job, because we always wanted our line or division to carry the day, and we won our share of gold stars. Which, if you won enough, you got a free cup of delicious, soothing coffee, so it was a big deal. It's been decades and I can still picture all these ropes being pulled around the company. The signal, a blast horn, sounded, like in a maritime harbor! The floor tilted and everyone clung to the rope, tugging with all our might, sometimes jerking the thing, which them was done in rhythm like in rowing (but pulling the rope) stroke, stroke, stroke, so satisfying the teamwork.

You can imagine the value. The teamwork took us out of our individual mind to a more exalted group mind, away from our own personal euphoria to something bigger than ourselves, a sense of exaltation, that all things were possible! We, each individual and the team as a whole, were bigger than we physically were. Each one, whether it was the tough guys up front or us weaklings down below, received something of beauty in the experience. Stroke, stroke, stroke!

Then there was a strange pause, a kind of hush all over the world, as we realized the team had achieved a climactic moment, the crest of the wave. We were urged on -- mentally not audibly -- and we pulled with all our might to put the team over the finish line and get our well-deserved cup of delicious coffee. They tilted the floor back in place and we went back to our work -- weakened physically but with an internal mental strength -- and achieved our quota of appliances boxed, shipped, purchased, and installed all around the country that very night.

Did it do any good for my self-esteem? I can’t say it didn’t, but it was brief. I'm average, not huge. It’s good to relieve pressure once in a while, ask anyone. But whether this kind of activity is good for a factory -- I know a lot of guys had a hard time looking their fellow guys in the eye for a while after. It’s like there’s a strange mental block, like we felt ashamed. And it's really not hard to churn out appliances without the group activities. Plus, I knew some of the foremen were embarrassed to force us to degrade ourselves like that.
Posted by dbkundalini at 6:00 AM