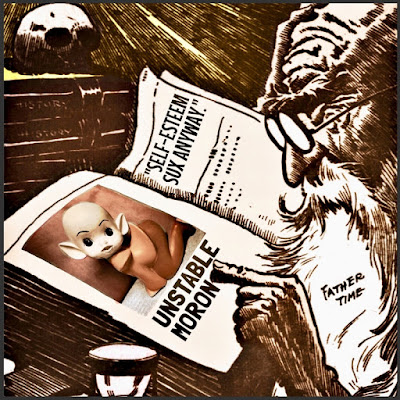 I suppose I really should have good self-esteem, and, who knows, maybe I do. It could've been like a month-long headache. One month you have a headache, next month you don’t. I keep hearing about chemical imbalances and how they change your moods. My presumption is you have your basic self all the time, what it is. Then the fineries -- like tinsel on a Christmas tree or frost on a pumpkin -- change day by day. You’re up, down, you're moody, euphoric, you're lost, you're found, etc.

As time goes on, you experience so many variations that you’re not always focused on it in the heat of the moment. And when you realize it, it hits you like something terribly wrong. If the problem's self-esteem, maybe you could just go back and see what you’ve accomplished, nicely presented, and maybe there wouldn’t be these downers of fragile self-esteem. Everything would present itself a part of the continuum, not merely brief moments with their constantly changing qualities.

What if I could recall what it was like to be a baby, getting my milk as a kid and being patted on the back to burp, my Mom saying, “Good job,” and me saying “Goo goo ga ga.” She thinks it’s baby talk, but really it’s my limited vocabulary and I'm trying to say, “Tell Dad when the computer revolution gets here to found Google. You’ll be rich.” I don’t tell too many people that I actually have some time-traveling experiences, the beauty of which is that very few people believe me!

I’m not going to say I tried to save any dead presidents back in the day. Since obviously I failed. And the Vietnam War, I came that close to preventing it, but they cranked the damned thing up anyway. The most interesting one was to leave 2008 and come ahead to 2017 and copy everything off my blog, then head back to 2008 and start posting it sequentially. It saved me having to write it. I still can’t figure out how that happened, except it was extremely easy.

I’ve really only been doing it live the last couple years, not that I’m not lazy, but I’m trying to stave off Alzheimers. A guy named Alzheimers, who thinks I’m copying his stuff. This part is true, someone’s been checking my blog for where it may have been plagiarized from and the real answer's time travel. Other than that, the only plagiarism I do is from the auto-correct for particular words.

One other time travel thing. I caught wind of it that in 2030 I win the Medal of Freedom. Being modest, I went ahead to 2029 and took my name out of the running. In addition to modesty, just to be frank, I don’t want that kind of respectability; it’d ruin my street cred, which I acquired by saying “Yo” to the right guys.

My self-esteem has been rising lately, after starting the month pretty fragile. I have a lot of people to thank for that, but I haven’t taken names. And those of you who’ve introduced yourself to me (saying “Attaboy” and “Way to go” and “Thank you for your service”) I heard so much of that I got a big head and forgot you already.

It did mean a lot to me. But, clicking my fingers, “Easy come, easy go, daddy-o.” Time to shove off.
Posted by dbkundalini at 6:00 AM