Ugly Or Fairly Not So Bad 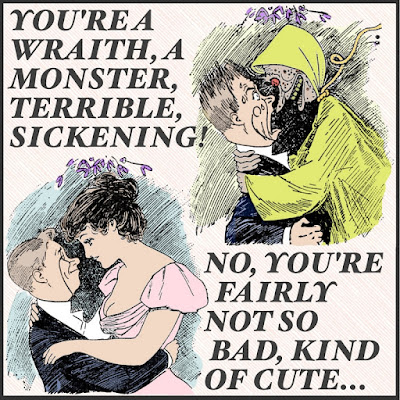 I haven’t yet attempted a definition of self-esteem, since the obvious assumption is we already know what it is. Simple. The whole thing makes me groan because defining things is one of the hardest things to get right. But it's always easier to attain if you at least give it a shot, with a quick disclaimer that it might not be airtight, wholly accurate, or satisfactory to all. The last point is obvious, because you couldn’t please everyone with mother’s milk, let alone definitions. But, crap, no one's going to do it for me...

Self-esteem is the subjective estimation of yourself, your personal sense of quality or lack thereof. For the extremes in the literature see I’m Shit by Sad N. Lonely and The Best A Man Can Get by Ray Zoar Blade. Both Lonely and Blade clearly take opposite paths. And as far as I'm concerned Blade just shaves the surface in his outlook while Lonely’s in a class by himself, meticulously accurate and exhaustive in his torment, which resonates with me as seen in each of my own torturous blog posts. But while I lean toward Lonely’s point of view, sharing his withdrawn/desiccated vibe, I’m still completely interested in Blade’s cutting style, actually to the point of adoration, yet suspecting it’s a boasting cover, giving us finally in the end two men with the same experience. Lonely as a wannabe, Blade a neverwas.

But, obviously, self-esteem is a thing you don’t have to read about or have expertise in to have real live-wire, exposed-nerve experiences with. For your life is exposed. You touch here, you’re shocked then swept up as a cinder. You touch there and you've bought the farm, depending if you’re at an auction sale or on your deathbed. For self-esteem is a combination of things, the good, the bad, the worse, the worse yet, the ultimate worse, then we're in negative territory. It can kill you, which potentially brings pain, suffering, shock, misery, heartbreak, despondency, torment and even braggadocio (cf. Lonely and Blade, et al. Reportedly, Sad N. Lonely howls at the moon even on nights when it's not out.)

My own problems with fragile self-esteem (and this is what you paid $100 to hear) were well known throughout my childhood. A quick review of my school pictures shows a child with his head down and eyes averted year after year. I was down, as we now know, but back then they blamed it on two things, being shy and very afraid someone in the immediately vicinity was going to steal my shoes. Well, shoes is now something I can take or leave. Yes, I was shy, and I was afraid. But I went through eight pairs of shoes in one week, so you tell me. Then factor in everything that every bashful, self-loathing person goes through; it all contributes to fragile self-esteem.

My illustration above, lifted without attribution from a scholarly periodical -- screw ‘em! -- shows the extremes of fragile self-esteem, one's beloved periodically seen as a wraith, a monster, terrible, and sickening, but then just as quickly can be seen as fairly not so bad and even kind of cute. How these things happen, we chalk it up to the strange extremes of self-esteem, alas, all wrapped up in one not-so-tidy fragile package.
Posted by dbkundalini at 6:00 AM