Lost In The Crowd 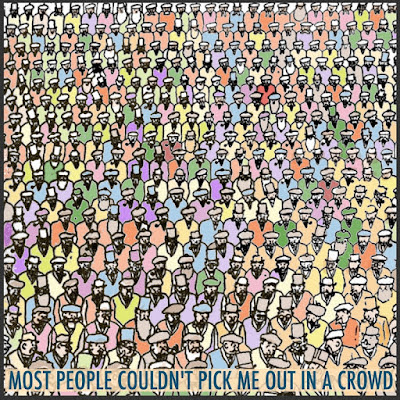 Most people couldn’t pick me out in a crowd. Woe is me. Among the most frequent guesses, looking at the picture, is that I’m the guy in red, but that’s not right. My eye also goes to the guy in red. In fact, I’ve looked at the guy in red so many times over the years that I’ve lost track of the others. I could’ve been him, but of course I wasn’t. I'm just another nameless face in the crowd. Which, on thinking about it, isn’t so bad. There’s no particular judgment I have to face. No one can say I’m not smiling, not a happy person, not personable. Which usually I am, all that if not more.

But who cares? I don’t care either. Although I do like seeing pictures of strangers. I find them on Facebook; everyday I see more strangers. Each making their comments, liking things, arguing politics, spouting off, rabble-rousing, taking their place in the argument, staking their ground, carrying on on matters of principle, giving a witty answer, which sometimes I like, usually think, yes, that’d be among the top five witty remarks I’d expect to see! How terrible it must be at Facebook HQs looking at a dispute. Getting involved would give me a migraine. Work it out yourselves, stupid!

Nothing zaps my self-esteem faster than being one of many. Because the vanity of the whole thing at that point is overwhelming and obvious. I’d be better off deleting accounts and sitting with a stack of books -- ancient poetry, philosophy, etc. -- and reading. Think of those old guys with the flowing beard, sitting by candlelight in a tall chair with a slanted table before them, lost in their own thoughts. With their thoughts having very little to do with everyone else. If there’s a billion people, divide the days of the year, Everyday it’s millions of people’s very special birthday, have a happy birthday, may all your hopes and dreams come true. Maybe get lucky tonight.

The only way to have and keep your self-esteem (for what it’s worth) is to exclude the masses and do things no one else is doing, which of course you never know. My day has a lot of necessary stuff, taking the dog out repeatedly, eating, doing dishes, checking the mail, making sure the bills are paid, fending off thieves, avoiding doctors, turning away romantic offers, watching for police. Speaking of the police -- this has me thinking -- two officers were at my place just yesterday. I peeked out the window but didn’t see anyone and didn’t see any cars. So I had to just open the door and there they were! They were looking for someone who used to live here. In the Big City every address used to have suspicious characters living there before. They took my word for it that I wasn’t him, but I was thinking I might’ve been arrested!

The guy used to live here and he's getting more attention than me, thankfully. Dozens of people used to live here, maybe a hundred. The Big City has ‘em coming and going all the time. Plus people living in boxes, under metal cowlings, bridges, etc. What do the police do? What do they want? Whatever it is, there's millions and billions of people they can stay occupied with, leaving me alone 99.999% of the time. Only yesterday, there I was, face to face. Thankfully not doing anything illegal. Except my dog may be behind on her registration, maybe, I’m not admitting anything...
Posted by dbkundalini at 6:00 AM