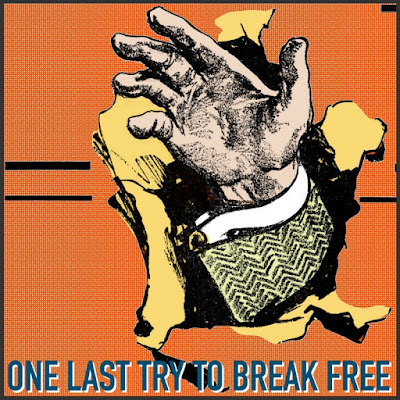 Seeing myself in a crowd of people, indistinguishable from a bunch of idiots, really was the last straw for my withering self esteem. They say nighttime, our dreams, the interplay of hormones and zygotes, then zygotes taking on unicorns, the next thing you know you're either waking up a loser in the freak show or with a new, better, exciting and above-average breakthrough.

It happened to me. I actually felt it coming on me just before falling asleep. My toes were tingling, the hair on my legs stiffened, there was some unpleasant backfiring in the privates region, my stomach churned (in a good way), and my lungs -- this was scary -- only worked every other breath. One side breathed, then the other. That’s when I realized this was a genuine breakthrough and not just my physical form giving up the ghost. I opened my mouth like a werewolf and my eyes were on fire. I knew I would either wake up on the warpath or happily ever after.

I got up, paced the floor for an hour, put on my yellow tweed suit, and literally thrust my arm through the wall. I muttered to myself what I love saying to my enemies when I spray machine gun fire in their general direction: “That could’ve been your head...” Then I spit, took out my chaw and worked on a new plug. (If you haven’t chewed tobacco lately, for a plug nickel you can still get a nickel’s worth of plug, which isn’t as much as you could get in the Old West but it’s still nothing to sneeze at. For that you need ragweed.)

In one strange last straw moment I felt, indeed, this was the last straw. And did precisely what the moment called for, ramming my meaty fist through the slender wall, which, again, could’ve been your head. I wasn't discriminating. Anyway, the hole opened on tiny room I didn’t know about, which was the cubbie-hole where the house used to have a telephone. I reached in and first latched on to a mouse, which I promptly pulled out and dropped. Then I felt around, a nasty scatter of mouse poop, finally pulling out a small sheet of paper from an old notepad.

Shaking more mouse poop off, I held the notepad in the light and read an ancient note: “Uncle Alfalfa feels better.” This couldn’t have been more helpful to me if it'd been the Gettysburg Address in Lincoln's own notes. Because I am an uncle and my childhood nickname for about two weeks was Alfalfa, which I spurned at the time. See my excitement here? The lesson I took from it was, Just as Uncle Alfalfa felt better in the past, so could an Uncle once known as Alfalfa (2 weeks, maybe a week) feel better in the present day! Wow. Celebrate with me.

This stunning discovery was just the breakthrough I needed to reinvigorate my fragile self-esteem!
Posted by dbkundalini at 6:00 AM