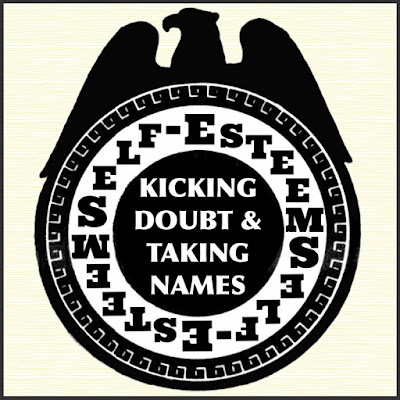 I was so touched by the Parable of the Giraffe -- it’s a giraffe whose qualities and spirit reminded me of an allegory -- that I couldn’t stop thinking of it. And I don't usually like gory stuff. This time I focused my mind on it, basically involuntarily, to the point I was feeling ill. I can never quite manage to turn my mind off, then it goes into Code Red, all circuits overloading, and I either have to suffer it or search the house for knock-out drops.

Anyway, none of that unpleasantness today -- I’m not an addict, I can stop any time -- the giraffe touched me for good. And gave me at long last the courage to consult with a particular organization whose focus is on Self-Esteem. One big reason I like it is they feature the eagle prominently in their literature, one of my favorite birds. Consider the eagle, if you will. It’s so majestic that entire countries adopt it as their symbol! The eagle’s got it going on. With its magnificent size and strength, it can raid every other bird’s nest and make off with the goods and no one can stop it!

This is true. When you’ve messed with an eagle the first time, you’ve messed with an eagle the last time. Because it’s going to be on you like a ton of bricks. And that’ll be the last time you mess with an eagle, not to put too fine a point on it. I myself, for all my other failings, have strictly avoided messing with eagles. Other kids messed with them and were pecked to death. But I was raised right, hearing, “You don’t wanna be pecked to death do you?” It seemed like the answer about had to be no, so that’s what I learned to say.

Anyway, the organization, the way I picture it, has several dozen buildings full of counselors, guides, secretaries, spokespeople, accountants, and guys who travel the country bucking up guys with fragile self-esteem when they’re down. The main thing about them, I fear, is that they’ve got it down to such a science that if you don’t immediately respond to their demands to have self-esteem they’ll drop you. And even if you’ve paid the membership fees faithfully, they can still neglect you if you’re too demanding. Fortunately I always know how to moderate myself so I’m not too demanding. But the huge unknown in doing that is you don’t know objectively how demanding everyone else is. So there’s no definite target to hit. You could be minimally demanding and still be relatively very demanding. Then they drop you.

But that worry's for another day. Today we’re celebrating their fine work -- helping to buck us up in our self-esteem to the extent that we need it, within reason. And it's really to the organization’s benefit to be somewhat generous, because we could all quit en masse and jump in the river, getting what we and they deserve. Then where would they be? But since it’s all so obscure -- one member never knowing what the other members are doing -- they're aware we can’t organize in an effective way. Actually it's in the fine print that we shouldn't even try.

But I’m happy. As long as these unknown counselors are “Kicking Doubt & Taking Names” it’s good enough for me!
Posted by dbkundalini at 6:00 AM