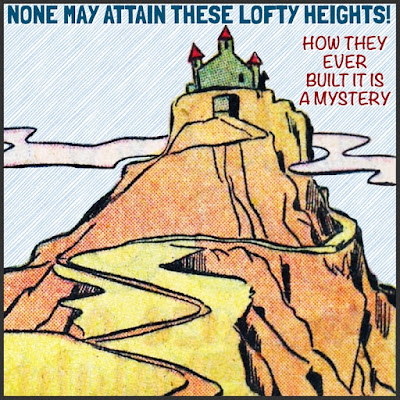 Every journey to a beautiful castle on the mountaintop is nearly endless. Like your birthday when you’re 10, it's a million years to get there, then it’s over in a flash. Except the castle remains, of course, not being a mirage nor a shimmering bit of sunlight on the highway.

Because someone planned it and got the finances together -- usually gold doubloons from pirate’s treasure buried and discovered -- and plotted it out, putting it on yonder hill. And so it was, leaving the rest of us to see it from afar, hoping to attain its heights, and once we have, to maintain our place at the master’s table, eating well everyday and hoping to escape too much notice so we’re not thrown out, or worse, for the master to turn out to be a crazy guy who throws spears and in one massive heave pins us to the dining room wall.

Every bit of property I attain is seems like it's something to pin me down, at least weigh me down. However necessary it is at the time. And the more there is is not always the merrier. Which I always know but never fully realize until I’m choking or drowning in excess. When it comes to actual castles, I'm sure I'd be happier if someone else owned them. Then I could merely see it from afar, figure it’s a forgettable tourist attraction and worry that if I visited I'd get sucked in at the gift shop and buying snow globes of it for all the kids, and eventually regretting the whole thing, as I regret everything I ever do. I even regret admitting things.

So how about this for counterculture: Down with castles! They’re either decrepit, infested with vampires and carefully hidden cemeteries (sheltered), or they’re so lavish that you choke on it, with either an eccentric master on site or a rich absentee owner who can’t be bothered, off screwing people in some other way.

The whole thought of a castle fills me with revulsion. My self-esteem, whatever I’ve managed to cobble together on some random day, falls away. First, I’m not worthy to have it, and even if they found some way of giving it to me, I’d also be far from worthy. My spirits, already flagging, would sink when I saw the many tasks a responsible master would be required to do. Bringing in expensive workers, most of whom could not be automatically trusted, to patch up this, patch up that, all the while robbing you blind with overcharges and stealing you blind, pilfering everything from the silver spoons to the stately grandfather’s clock.

As a shimmering vision, a castle on a hill in the sunlight, if it disappears quickly as a vision suggested by the fog, is a beautiful thing. You consider it and wonder if anyone else saw it. “I’m pretty special for catching a glimpse of that! Not even my phone could’ve registered it in a selfie!” High self-esteem. But you see an actual persisting castle -- and picture to yourself its sinking foundation, the whole thing an insurance nightmare -- I shake my head and say "No, thanks." One, my self-esteem is artificially inflated so I’m smart enough to avoid the attachment. But it crashes again -- usually fragile -- when I realize, I’m not turning it away, really, because it was never offered me. You'd have to be the toast of the town to get an offer like that!
Posted by dbkundalini at 6:00 AM