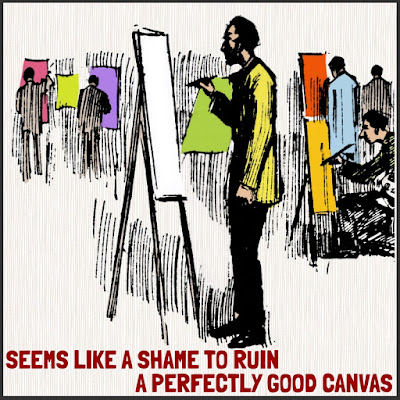 Part 9 of 30
My Fragile Self-Esteem

It was probably ten years ago that I had the idea of doing art to help my mental outlook, which at the time was also a brief and challenging episode of fragile self-esteem (seven years) that dogged me like a hellhound on my trail. I was jittery, my hands shook, my body succumbed to the cold sweats, I was very irritable with family, friends, loved ones, and even strangers. Even the friendly guy who came around for the cancer drive, I about bit his head off: “Sir, take your book of receipts and talking points on the latest miraculous breakthroughs and leave my stoop. I told you once I can’t give, I told you twice I can’t give, and now I’m telling you nicely for the last time, I won’t give, I simply can’t, sir!” I physically seized him by the scruff of the neck and his pants and flung him to the other side of the road.

Later, trying to help myself recover, I went to an art store and bought a couple small canvases with the wooden slats built in and a box of oil paints. I really expected to dig in and enjoy myself in this new-for-me field, becoming an artist and painting the masterpieces that are typical with amateur painters. What happened next, though, wasn’t what I'd hoped for at all. Instead of painting, then running out and buying new canvases, always bigger and better canvases, I never painted a single stroke. The paints were left unopened. I couldn’t think of anything to paint, I’m not a good painter and drew a blank, and a couple years ago when I moved to The Big City I gave all the paints and canvases to Goodwill.

Recently, then, my fragile self-esteem again took that familiar journey -- it started like a nagging then persistent itch, then transformed into a blank pain which over a period of scant days became a gnawing pain. Once that happened, then, it was busy at the molecular level folding in on itself, reaching out and feeling for new boundaries to surmount, working on me 24-hours a day, taking all the time and opportunity it needed to go rogue. One day it hit me; I looked in the bathroom mirror and was wrapped in the self-esteem equivalent of tentacles, reaching out, curling back, and twisting at random. I swatted at them like swatting flies, but they only swatted back, cowing me.

So it was a south-of-the-border standoff. Making me think again of art and painting. With the brainchild idea that maybe this time the message of the tentacles -- the vision -- was, “Get out there and waste a few canvases. There’s companies just dying to make and sell canvases. With factories geared up for it in league with paint factories. You’re probably a good painter if you specialize in abstracts, no one can really criticize them.

This time, though, I didn't just stay home but went to a studio, thinking the peer pressure might really motivate me. But the time I got there my fragile self-esteem had entered a more viral stage of fragility. The good news is no canvases were harmed; they were all released back into the wild. The bad news is I don’t know what all the other stages of fragile self-esteem might reveal, negatively speaking.
Posted by dbkundalini at 6:00 AM