I'm Not At All Good Looking 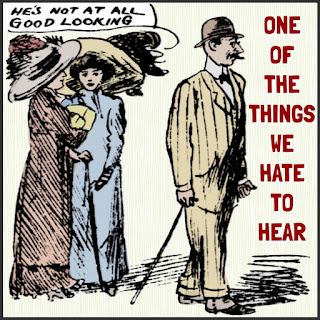 I hope this doesn’t come as any big surprise, but the Number One cause of fragile self-esteem -- referring of course to the standard Richter’s Scale of Self-Esteem, Man, Beast, or Plant -- is your appearance. What do you look like, ape or man?

Appearance can take in a whole bunch of things, gender, country of origin, economics, personality type, etc. Personality type is one of the more interesting categories, because some personalities are proudly slovenly, set in their ways, inert. Because even if you're your own worst critic, there are things you can't see. If you look in a mirror -- I'm convinced of this -- you're not really seeing what others see. I'm in my 60s but look 26-ish in the mirror, to me.

In reality, though, a guy can look like an old-fashioned city dump in pants, or, if it’s a woman, can resemble the same city dump in a girdle so tight it’s constricting her blood-flow and given her very tight veins. Anyone with an overly pale appearance, it's generally a matter of shy, very demure, veins. You see one, you want to be careful. Don’t buy her an ice cream sundae because the first bite she’ll pop! And speaking of Pop, he's got diabetes real bad and can’t have ice cream, but that doesn’t stop him from sneaking it, resulting again in tragedy, his blood sugar so wildly out of whack he sweats through his clothes and ruins the couch. And maybe dies. Either way, the couch is hauled out.

So “appearance” is a catch-all category. If it “appears” to fit, throw it in, the more the merrier, "ya ha, I'm so proud, I'm the merry prankster!" There’s a lot of people who like to work with data. (Which may not be especially relevant, my first spoken word as a baby was Data and Mama.) Although now with the couch ruined, and Data maybe dead, maybe not, depending on if someone called 911, it likely doesn’t matter. I’d run in myself and check but I’m on a deadline with this article. And I’m weighing every word, consulting the dictionary, seeking sentences online that I can copy without detection, common stuff, like “It’s a nice day where I live,” who’s going to know? It sounds like something I might say so it's good enough!

Anyway, appearances. Did you know this? I used to be a consultant for a church. With me so far? The church had a TV ministry, and one of their doctrines had to do with the blessing of God manifesting itself in prosperity, always bettering your best, receiving and having material things, more and more, greater and greater luxuries, swag, being the envy of the world. And they knew the truth, that any of the riff raff coming in with despicably bad clothes needed to be dealt with. We mostly sat them in the last rows, then say 10 minutes in, we’d rotate them out and bring in a new bunch. Each bunch would get donuts and juice, then go through the door to the “jacuzzi,” which was actually an exit that locked behind them. That church had high self-esteem, and I’m sure you’d agree they deserved their stellar reputation.

All that is kind of amusing, I know -- which I might reprise if I ever do the theme “Getting Away with Anything” -- but today we’re worried about self-esteem. And whether Richter had it on his scale or we merely go by common sense, appearance is the number one thing. If you overhear someone say you’re not at all good-looking, it’s 50/50, maybe you are purely ugly, but more likely it’s a mixture of your physical appearance including your clothes. And even a monster looks halfway decent in a nice suit and tie.

I'm sure you get the point.
Posted by dbkundalini at 6:00 AM