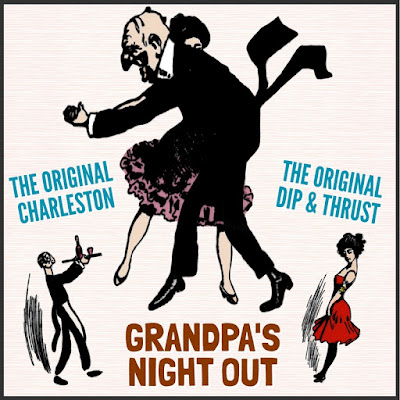 For my lack of self-esteem, and it being so fragile, I've round up a few culprits. It’s mostly a generational thing, so I’m pinning the blame today mostly on Grandpa.

Talk about high self-esteem, Grandpa was the kind of guy who could tell others to kiss his bootie, then stand there and expect them literally to do it. His strong self-esteem led to all kinds of social situations where he was the No. 1 man. With even the mayor -- a man of definite pride -- taking the backseat whenever Grandpa was near, bowing, scraping, the whole self-immolation deal.

So it wasn’t any big deal that Grandpa, when other men of his generation were dead, dying, or hoping to die, was out on the town, breaking hearts and still able to teach women a thing or two. (There was about a two-year period when Grandma was sick, so she had no clue.) He had all the strength. Which, whether it’s right or wrong, it happened. I’d say he played his cards right, that’s the only explanation for his dominant ego and utter persistence at being a man of personal strength.

Those were the days of Men and Worms. You were one or the other, with most being Worms. But not him! His nights on the town were legendary. He still gets the credit for originating the (still on display at dance museums) Dip & Thrust. Look at it this way, he sired five children. That’s a lot of quality dipping and thrusting. It’s certainly more than we see in the modern world, where if you ever see anything but a Worm you go home, drop to your knees, and thank the Good Lord.

But our problem in the modern world is fragile self-esteem, so it’s not just me. Yes, a lot of the blame goes to previous generations not recycling it when they had the chance. But to the extent that having it today is still possible -- obviously -- we ourselves are to blame for not horning in and claiming our fair share. We’re weak. But we still have responsibility for it. Are we putting our self-esteem away and allowing it to survive? Or are we using it up? Do we ride it hard and put it away wet?

Whatever problems I have, small or great -- and essentially they’re monumental problems -- I still have hopes. If I keep my eye on the nightclubs, keep my eye on the ladies, and maybe come up with something even one-third as good as the Dip & Thrust, I might yet make something of myself. Until that happens, though, sadly, you'll mostly hear me say, "Woe is me,” while keeping a stiff upper lip. At least I had relatives that had it going on, and that’s more than most guys can say.