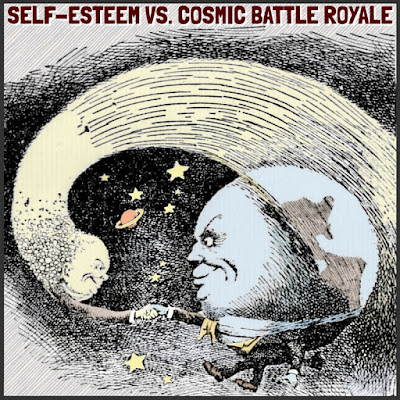 I got an important badge the other day. I hope you don’t think I’m bragging, but if I don’t toot my own horn no one else is going to. And even you, my favorite reader, probably won’t be too impressed. I ran it by my Facebook friends, who celebrate with exultation every milestone anyone has -- a guy I know collected his eighth stamp the other day -- but my “big news” was a dud.

The milestone is  -- and I want to drive home this point if for no other reason than the sake of my fragile self-esteem -- I watched my 200th YouTube video on the mysteries of outer space. That’s a lot of watching. And learning, whew! The learning’s been crazy. I’ve had to transfer several years of other memories from my brain to an auxiliary desktop brain just to make room. And some of those memories were childhood stuff, everything from the ABCs to what my parents looked like, so if I lose that … I better not lose that.

So far, though, so good. Outer space is a big deal for me. It’s vast. There’s no known end in sight. It’s fascinating. But it’s also a little stifling, especially the distances. Talk about fragile self-esteem. I’m top dog in the world as it is, our own little world. But there’s no limits to the vastness of space. And even now somewhere in that vastness there’s the cosmic equivalent of a punch press punching and pressing out baby planets. They spring into existence and in the first five seconds they go from the size of a seed to the size of the earth! Which would be like you being born, then a second later fully grown! Or even bigger.

As for me now, the scales I’m dealing with day to day are a lot more incremental. Say I’m reading a book. It doesn’t just explode into my mind already read. I have to read it syllable by syllable, “Chapter One.” Then I think, Wonder how many chapters there are. I see there’s 50 or 60 and get tired. I lie down and take a nap, then everyday I'm thinking I should get back to that book, but there’s always something else I need to do. Finally, I forget the book altogether. My room’s in a jumble. A year later I pick it up and realize I forgot what Chapter 1 was all about, so I about have to read it over.

The sad conclusion to that, then, and I’m extremely humble for admitting it, is outer space is a lot smarter than me. It’s also a lot meaner, or more accurately it’s quite the rough and tumble place out there. Seemingly infinite space, billions of galaxies, stars, planets. But none so far has been discovered that’s entirely like Earth. Making us extremely lucky we picked the one we're on! That should do something to your self-esteem, and, hey, in a way it bolsters me a bit. I don’t remember the whole situation, but obviously I did one thing right in choosing to be born in the one place we know sustains life!

As time goes on, however, we’re still not in the clear. Because there’s a lot of collisions in space. You can find videos on the end of life as we know it. Meteors, whatever. A new Ice Age is coming perhaps, a world of Ice Age creatures replacing us, big sloths, ungulates, the works! Plus comets smashing into everything and black holes gobbling us. There’s always that danger. Being at the mercy of things like that, like we are, our self-esteem doesn’t stand a chance.
Posted by dbkundalini at 6:00 AM