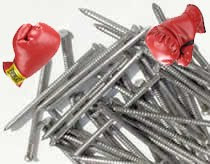 What makes nails so tough anyway? They have a spine made of pure steel. From the muladhara to the sahasrara, or in laymen terms, from top to bottom (not respectively), they're made of tough stuff. They're tough on the outside and their inner is like their outer. Remember, though, it's all in a manner of speaking.

Plus, they have a point and they have a head, and the two aren't the same. The point is where they take their stand and their head beams proudly from that place. They can be very driven -- in fact that's exactly what we call pounding them in, driving nails.

Nails are tough when they're together. They know there's power in numbers. Take a single nail and drop it on your foot. Didn't feel like much, did it? Now take a box of nails and do the same thing. Hurt, didn't it? You've always got the potential to be tougher than you think you are.

And one other thing, nails are faithful. Once a driven nail is in a board, holding something together, it will be faithful till you're dead. You'll come back 75 years later and it'll still be holding its own. It will not leave its post. It's toughness will not flag.

How am I working on it? Not by working out, let me say. I work out in a very mild way, although I need to kick it in gear so I don't suddenly get heart attacks. But I'm not talking about being physically tough as nails. If you come to my house in 75 years, I will be long dead. But the nails might still be there. I'm talking about being mentally, spiritually, psychically Tough As Nails -- Nail Tough.

It's a process that I'm in, mixed in with all the other ways I'm terming this personal development. It's self-help in the sense that I need the help, and I know I'm not going to get it anywhere but from within. Reading a book may give me pointers, but the the reality is always going to be inside me or it's not going to get done. And the same for you.

There are lots of situations that we're in where it pays to be Tough As Nails -- Nail Tough. Like with your employer, your family, politics, or religion. It pays because there are times where you either nail or get nailed. Sports would be another one. If you're a gymnast, that's exactly what they say, "She nailed it!"

When I step into a situation there are a few things that guide me, and, remember, I am not Tough As Nails -- Nail Tough. But I want to be. 1) I do not want to say or do anything that I'm going to regret later. 2) I want to keep a cool head and play the angles. 3) I will not overtly play one side against the other; I will take the path through the middle and let them work on each other. 4) I will seek my advantage, but I will roll with punches, come what may. I've had much and I've had little. I've been happy with much and I've been happy with little.

Being Tough As Nails -- Nail Tough doesn't mean you always get your way. But it's a thing of percentages. To the one who is TAN -- NT there is the strategizing (not always something that has to be consciously done) and there is the confidence. The confidence remains confidence whether you got your way in the situation or not.