DNA -- He With The Most Dandruff Wins 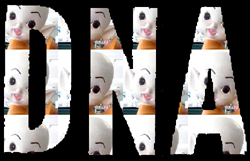 We live in a crowded world. Not just us, the normal people of the Western world, but the hordes of everyone else out there always storming our gates. It's not that crowded where I live, the neighborhood is fairly quiet. But it's only a 15-minute walk south to the interstate, where the entire country speeds by.

I mentioned the hordes of everyone else -- all the picture book races -- the millions of Hindoos of India washing their loincloths in the river, the Musselmen with their minarets, hookahs, and turbans, and of course the honorable Chinamen, who, I think, started this whole horde mentality, or was it the Huns? At least it's bad enough for them they're limited to one baby each.

I can't keep track of everyone, and frankly I quit long ago. One day I threw up my arms and said it's too much. Because it is. I still see the birth notices in the local paper and that's it. I have this little habit I started when I was a kid, to count the births, then I turn to the obits and count the deaths. My biggest finding -- and I started this around 50 years ago -- is that it's pretty much even. One of the weirdest things about it is you hardly ever see a pregnant woman and yet kids are born all the time. But the same thing could be said for the dying, you hardly ever see anyone actually dying. They're always off indoors someplace doing it.

I'm mentioning all these hordes, and people being born and dying, to get to everything we drop. We are literally everywhere. Like me, I'm still technically where I was yesterday, downtown, even though right now I'm sitting here at home. I might argue I'm everywhere I've ever been, if I haven't blown away or been replaced by someone else. Intriguing idea, huh?

I'm talking about our DNA, the stuff Maury looks at to see if you're the father. DNA, and I'll just say this without looking it up on Wikipedia, is something everywhere in you, like the building blocks it takes to make you. We've all heard of cloning. DNA is what they'd use if they were going to clone you. Meaning, right now, I could go virtually anywhere, stick a swab on the ground, and I'd be picking up someone's DNA. Then if I knew how to clone someone, I could take it home, and after however long it'd take, they'd be sitting with me at the dinner table.

It wouldn't matter where I daubed the swab, because either someone's been there, or their DNA has blown in like seeds off a tree. Right down to their skin cells, which are falling all the time, or their dandruff, also falling all the time, or their spit. Have you ever noticed, say you're sitting in bright sunlight, how often you spit when you talk? All the time! I'm very paranoid about this everywhere I go, especially restaurants. If the waiter's standing there taking our order, I move my silverware and glass of water to the side as far as I can. And even then I don't know what happened behind the scenes. My water, my silverware, my food, has enough DNA in it, I'm probably ingesting a horde every time I take a bite. You could murder someone, go to the bathroom after you did it, and when the police showed up and started taking DNA samples, they'd have a thousand suspects.

So if everyone was out swabbing everything and cloning people in their spare time, just for the heck of it, it stands to reason that the more often you sneezed, coughed, or laughed in public, the more clones of you there'd be. And since there's DNA in dandruff, it means the more dandruff you have, the more clones of you there'd be. A guy with a whole list of personal problems, always having a bloody nose, hay fever, cold, and dandruff would eventually rule the world!

And don't even get me started on everything that goes down the toilet! I can easily picture random sperm and eggs taking root in a passing muskrat's stomach and growing up to be a whole new breed of monster, half muskrat, half man. A hairy guy with a long tail shows up at your door going, "Poppa!" It's scary.

But let's just stick to dandruff today. I don't think I have a lot of it. I'm afraid to look because I might. But if I do, at least it turns out there's a bright side. Immortality and lots of it!
Posted by dbkundalini at 11:15 AM