Tough Love To The Rescue 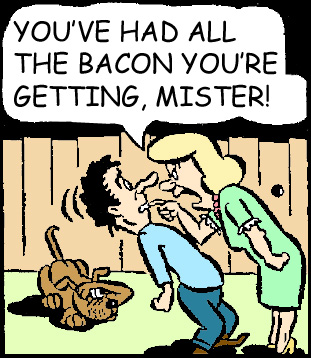 We need to know how to handle people. If they're always throwing tantrums to get their way, that's no good. The best response is tough love.

Well-paid psychologists tell us that if we give in too much, we're just setting ourselves up for a sad life of more of the same. Common sense suggests this is true.

I heard of a case where the husband and wife each enjoyed bacon pretty much equally, with the husband enjoying it just a little more, certainly more than he should, as it turned out. They would eat at about the same pace, but he just a little faster, enough so that he'd be done with his bacon first.

After a while, he started looking at her remaining bacon, which soon became such an appraising stare that it was clear he had more on his mind than her pleasure alone. The fact of the matter is, he wanted his wife's bacon and wasn't ashamed to say so. She innocently gave in only once, then on other days he threw one tantrum after another to get his way.

Finally, the wife had enough, and having heard of tough love, she put her foot down. "No! It's my bacon and you're not getting any more!" Tough love! See how it works?

The same thing goes for children. If they always get their way, pretty soon there is no other way. They've got to have what they want when they want it, be it some particular food, toy, or, in these modern times, a phone, a video game, or pet. It's hard to say no to the little leeches, and that's what you think of them, because they're insatiable, at your throat for more, more, more! You just have to put an end to it: Tough love to the rescue! That's how it works. Let 'em suffer!

Speaking of pets, it even carries over to animals. They're like the husband in the story, their big thing is always food. I've had this problem with my dog Underbrush. I've been merciful and kind, giving her some little scrap, then she comes to expect it, to the point that she's sitting on the floor by my chair looking up. Then she's got her paws on the chair. Then she's managed to work a bib around her neck. At last, she's growling and baring her fangs, as if to say, "I'll take the whole plate and you take the scrap!" So much for mercy and kindness! I finally had to put an end to it, and with firmness. "No! You're not getting any more! That's it!" Tough love to the rescue! (Of course I don't go ballistic on the dog, this is just overstated to make my point; I still give her little scraps, thanks to those longing eyes.)

Then we have relations in the community. It might be your minister, a bartender, or a waitress you tip. If you're not doing exactly what you did before, or more, it makes them crazy. It's even true with your doctor. Maybe you're old and maybe he's a Medicare cheat. He comes to depend on all the extra x-rays and shots. That's how he's able to restore yet another collectable car. You go along with it for a long time because you don't want to make your doctor mad. (They're only half as bad as mechanics.) You don't know what he might do to you.

But if you want any peace whatsoever, after a while you need to cut him off. With tough love. "I recommend these ten x-rays, these five surgeries, and another twelve shots." By now, you've had enough. "No! No more x-rays, no more surgeries, and no more shots! That's it!" Tough love to the rescue! Of course you die next week, but you made your point.
Posted by dbkundalini at 11:13 AM