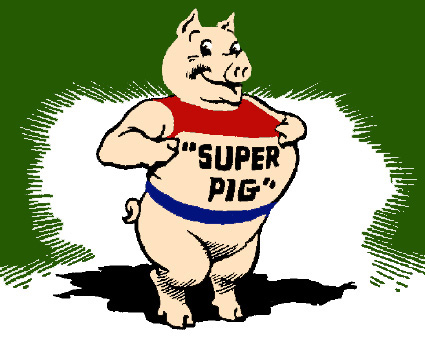 THE OTHER WHITE SUPERHERO
Super Pig is now one of the forgotten superheroes of the 1950s. There for a while, thanks to the Foxbilt Feeds company, we were expecting pigs to take over the world, or, in keeping with another '50s theme, to save us from ourselves. But the fact is, it never really happened.

I'm thinking that it was with bitter disappointment that the Foxbilt company finally gave up the dream when their assets were absorbed by other feed companies who didn't share the same lofty goals. By now, of course, the whole thing seems so far off, almost like it never happened. But for those of us who remember, and those of us who still have a bag or two of Foxbilt "Super Pig" Starter in the barn, the dream is still alive.

If you've forgotten how it went, let's relive the glorious promises Foxbilt put out there for us of an actual Super Pig flying through the sky and fighting crime.


You can wean 40-50 lb. pigs by feeding Foxbilt "Super Pig" Starter from farrowing to weaning. Nothing else is needed except plenty of fresh water.

Actual farm tests have shown these heavy weaning weights under a number of different management practices. The secret is in the bag of "Super Pig" Starter ... the pig-making nutrients are all included in the exact proportion your pigs need.

Get your Foxbilt "Super Pig" Starter from us today.

Hmm, that doesn't seem to hold out the promise of actual Super Pigs the way I thought I remembered. They'll just end up at 40-50 pounds "from farrowing to weaning", which, of course gets us into the whole issue of when the pig is weaned. These days, weaning might be done in 20 days or less and so you're going to end up with pigs a lot smaller. But in the '50s, if memory serves, and I can remember a lot of lively discussions at our place on the practices of livestock maintenance at the time, they weren't weaned until 50-55 days. I'm just doing some mental calculations, fairly arcane stuff to the layman, and it's my conclusion that Foxbilt was promising approximately 5-6 more pounds.

Be that as it may, the text of the ad, reading it at this present remove, was not promising a super hero called Super Pig. And I had a whole back story in mind for him, nothing overly creative, but still... My thought was, Super Pig was a favored pet pig of little Kal-el (Superman) on the planet Krypton, the runt of the litter. (Before Krypton's destruction, Jor-el planned to test his model rockets with pigs instead of people.) At the last possible second, sentimental Lara, Superman's mother, put it in the rocket with Kal-el. When the rocket landed on earth, the Kents found the baby and his pig, and raised them as their own. Every time they went to butcher the pig, of course its being invulnerable there was no way to do it. Later, Superman ventured out to fight crime, often aided by Super Pig...

I want to check the text of another Foxbilt ad. There has to be something more to it.

Your pay-off will be big, husky, thrifty pigs that tip the scales at up to 50 and even 60 pounds at weaning time (8 weeks). And it usually takes only one 50-lb. bag of "SUPER PIG" to get each pig up to about 50 lbs. That's economy!

I'm still not seeing what I thought I remembered as the promise of an actual Super Pig. But this one's a little more hopeful, since they can get up to 60 pounds. And we see that it's heavily fortified with enough things that could yield superpowers if, say, the pig's metabolism happened to be a little funky. Unextracted liver meal, blood meal, and the unspecified "etc," that frankly could be anything, pitbull brains, the spleen of Bigfoot, eye of newt, kryptonite, etc. It's conceivable that given enough unspecified ingredients we could actually have a Super Pig...