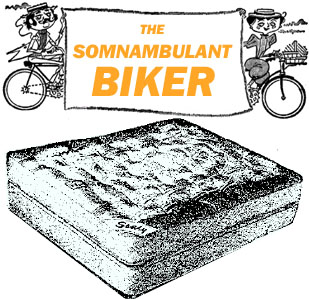 While I was eating my way to heaven, at the same bar and grill, they had their massive phalanx of big screen TVs tuned precisely to the channel with the bike race.

I looked up several times, mostly to see if I was under close observation, but also to keep track of the race. The bicyclists were gathered in a tight pack, with pretty much all of them going the same direction.

If you're in a bicycle race, there's some dangers; you don't want to be involved in a massive pileup. But there was one guy, and he's the guy I really had my eye on, who fell asleep numerous times in the race. Which is understandable to me, because just watching the race was making me sleepy. Not that it wasn't exciting; it was, but that kind of intense action and the riders in such a tight pack drained me emotionally and physically.

This guy, who they were calling the Somnambulant Biker, shares that psychological/physiological response with me. Frankly, I don't think he has any business being a bike racer if he can't overcome it. I know I would make a terrible bike racer. If I were in the middle of the pack -- this is the root of it -- I'd be so focused on that fact alone that it'd be hard for me to keep going the same speed as everyone else. It'd be like hypnotism; I'd be getting sleepy, very sleepy, then-- there I'd go, veering off. That's exactly what this guy did. Spinning out of control, he wiped out several competitors and came to a rest in a pile of hay bales.

But that wasn't the end for him. They got him up -- his team -- thanks to some smelling salts and got him going. I could read their lips, "You need to wake up, keep your focus," maybe the worst thing they could've said. Because it's not the focus that's off. It'd be better for him to lose his focus and thereby avert the hypnotic trap.

The next psychological challenge for him appeared to be the sharp turns. I can see that. You're going straight, then you have a hairpin turn, it does things to your thinking. If only it'd been more gradual, it'd give him time to adjust to the difference. Our minds aren't made to accept drastic changes, as seen in the biological explanation "ontogeny recapitulates phylogeny" -- things are meant to be gradual. But instead of accepting limits, we think we can circumvent nature, so for that reason it's so much easier to wipe out on sharp turns after long straightaways. And sure enough, the Somnambulant Biker fell asleep, and wiped out several more competitors before again coming to a rest on several bales of hay.

I was thinking, This guy ought to be disqualified, but of course I understood what he was going through. I looked down at another load of writhing mashed potatoes and almost fell asleep myself. So I was sympathetic, rooting for him when his team gave him another few whiffs of smelling salts. Then once again he was on his way.

It went on like that several other times. He had wiped out most of the field but was still going.

Then they were on the last lap and everything was going OK. He had to have retained quite a bit of smelling salts residue in his nasal passages, surely he could make it to the end. And yet the thought processes at work, driving him to sleep, were too much.

They were on the very last straightaway, just him and the last three competitors still in it. And I guess he got to thinking, I just might win. You know how that goes? It's an overwhelming thing to think you might come in first, because you're also thinking of all that could go wrong: It could be this, or this, or this -- the possibilities are endless. You keep thinking, thinking, thinking, worrying, stewing, and it builds on itself, it's mounting up, it's so intense, crazy intense, so bad that even on a straightaway you're not safe.

Actually, a straightaway might be the worst place to be, because you're also thinking how clear your thoughts should be, so you're going nuts thinking something is truly wrong with you. Then the closer you get, the worse it is. And so it was for the Somnambulant Biker. He was so lost in thought as they came down the final stretch, he completely blanked out, went completely black, veering back and forth, and knocking out the competition, only coming to an abrupt stop when he flipped over and crashed just an inch over the finish line.
Posted by dbkundalini at 10:23 AM