I Ate My Way To Heaven 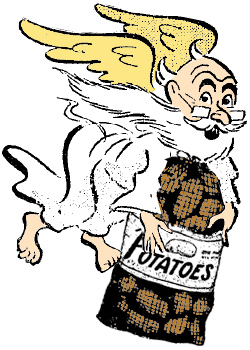 Here's an odd one.

I went out to eat today, not thinking it'd be anything out of the ordinary. But as it turned out, it was one of the strangest and most satisfying experiences in my life. After it was over, they said I ate my way to heaven, and it looks like they were right!

I went in with sandwiches on my mind, but ended up eating nothing but mashed potatoes. Heaps and mounds of hot, writhing, mashed potatoes. I'm farsighted, so I had to take my glasses off to focus on the task at hand, thanks to the thrusting movements and the general excitement of the crowd urging me on.

First, let me say, I'm nothing special. There were others at the trough, so to speak. But for each guy, and a couple of lesbians, everything was fresh, meaning no seconds, sloppy or otherwise. I may as well say, I wouldn't want seconds no matter how nicely they were prepared.

Remember, this wasn't what I went in for. But it's amazing what can happen when you're not expecting it. Something had provoked these people. It might have been like one of those "The Boss is Out of Town" sales, where anything goes. Definitely, someone had an idea. I was guessing one of the waitresses got it started. I wasn't there at the time. But instead of everyone else ushering her to the back room to make herself decent, everything got out of hand, and before you knew it, it was crazy time for the whole crew. It explained some of the disgusted-looking people headed for their cars when I was trying to get it.

I barely got in when someone grabbed me and I found myself facing-- looking down at-- good God, heaps and mounds of hot writhing mashed potatoes, and some of the most compliant servers I'd ever seen. With some of the cutest smiles just a few feet up. There were no words exchanged; you wouldn't have been able to hear them anyway over the shouts of revelers. Of course there weren't any introductions, no "Mother, may I?" Just cooks endlessly spooning out more and more mashed potatoes, and those of us who were intimately involved in doing our level best to clean them up.

My face had to be a terrible mess. But there weren't any napkins, and the urgency of the moment probably would've kept me from bothering. My hands were already occupied anyway, since I figured if I had one base covered, I may as well go for the others, too. It's not that far to reach, which goes without saying. If it meant a little more excitement all around, I saw it as a benefit.

I don't know how much mashed potatoes I ate, but it had to be more than the government's daily recommended serving. After a while, though, I'd had enough, and there were others to be served.

At that point, I learned there must have been some planning for this event, like it was an exquisite event of performance art that I just happened to be there for. Because a guy came up and presented me with a cool T-shirt that said, "I Ate My Way To Heaven" with an advertisement for the place, a bar and grill.
Posted by dbkundalini at 5:39 PM