The World At My Table 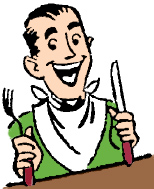 It's a great thing to go out for breakfast, thanks in part to all the people who make their way to my table to check on me.

Today, I'm honoring the owner, the waitress, the cook, the cook's mom and aunt, the owner's wife, the bus boy, the man on the street, an average egg producer, the pork producer, the muffin maker, and Rick Folgers, for their dedication.

It's sort of incredible that I get all this attention, just because I'm out to eat. But the time in which we live seems to demand it, if you combine all these factors: social networking, instant feedback, and keen competition. No one wants to be left in the dust just because they weren't paying close enough attention to details.

Really, I'm old enough that I can remember going out to eat -- of course I'm talking about Kentucky Fried Chicken -- and there were bouncers at the buffet to protect the food. You showed up hungry and left famished. Mixed with the piped-in music were subliminal messages: "I'm already full. I'm already full." Then as you were leaving, "I must return very very soon."

It's been a while since I've been back to KFC, showing one of two things, that it's possible for mankind to learn important life lessons, or that hunger occasionally needs to be actually satisfied. Someone can leave me a comment, if you've been there lately, telling me if they still jealously guard whatever the latest thing may be: Grilled, Rotisserie, or Original Recipe Classic.

But that's a whole 'nother meal...

I'm talking about breakfast, and me going out to one of those specialized restaurants where breakfast is basically all they do, all they're known for anyway.

OK, I was out for breakfast, thinking I might have to sit there and eat in peace, when finally everyone showed up. Let's hear from the owner: "I'm so glad you came in today, I hope everything's good." I gave the expected good report and a few compliments. Next, the waitress, whose business it is to make sure everything's going well. "We're good, thank you." The cook. You don't always see the cook. I figure they're back where things aren't quite as clean, so it was a nice break for him to come out and check on us.

Could it really be that the cook's mother and aunt would greet me at my table? They did! They're proud of their loved one, and rightly so, because he did a great job with my eggs and bacon. Then the owner's wife happened to be in town and stopped by. She looked cheerful. I always picture restaurant owners' wives as very unhappy, because the husband has to work such long hours, then he comes home to a table that isn't perfect. A fight breaks out, she starts drinking, and there's a cycle of recriminations.

The busboy is off to the side. He properly shouldn't appear till I've blown my nose on the last napkin and put it on the dirty plate. But he wants to get an early start with the things I'm finished with. Of course he needs to be pleasant about it, and he is. I tell him not to take my water quite yet, a request he honors. Then I see him scratching his nose with his middle finger, reflected in my spoon, but that's OK, it probably itched.

The one I'm really not expecting is the man on the street, who just pops in to see what the place looks like -- it was recently remodeled -- and to find out how I'm enjoying my meal. This was no one I recognized, just a nice stranger.

I mentioned the egg and pork producers. They're not always there, you have to be lucky to catch them. But if they're around, naturally they want to know how you enjoyed the eggs and the bacon, respectively. Although it's not hard to imagine a pork guy wanting to know about the eggs, and vice versa, their products being associated together often enough.

Next to last, the muffin maker -- a nice local lady -- came over. Just between you and me, I thought it was a little hard, it stuck to the paper too much, the fruit wasn't distributed evenly throughout, and it tasted day old. But since she's so nice, I said it was delicious. And last of all, coffee magnate Rick Folgers happened to be there, so he came over and asked about the coffee. The coffee was very good and I told him so, but I complained about it being so expensive. Since we all know you can make enough coffee at home to float a battleship for about 8 cents, is there really any good excuse for it to be $2 a cup?
Posted by dbkundalini at 1:27 PM