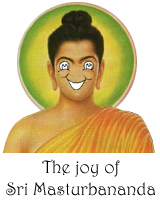 The spiritual realm continues to reverberate with the news of Brother Unsettled's transformation into a dead tree and his sudden decay.

No one can quite believe it, except of course our all-wise master, Sri Masturbanda. He clearly saw Unsettled's karma and many struggles and had to know something like this would happen. There's no way I personally could've foreseen it, that's for sure, since I've never heard of such a thing before. So I'm thinking, Live and learn.

The problem was Unsettled's disturbing response to Masturbananda's teachings, leading to Master giving him the name Unsettled. Maybe at some level he didn't think himself worthy. I hope it's something like that. That would explain his austerities, and how he couldn't quite get into the work as it was taught.

As I've explained a time or two, Master's teachings are meant to lead us into the experience of oneness with the Cosmic Father and Mother. But since we're so ego-bound we have a hard time making the higher connection. For the most part, it's only in devoting ourselves to the practice of Masturbananda's teachings -- driving ourselves to climactic ecstasy -- that we generally have those highest glimpses of the Divine. Yes, it's seconds at a time, but how precious those are! (We understand there is a correlate experience for women, but precisely how it works remains a mystery.)

Whatever Unsettled's basic problem was, he couldn't quite accept and practice the devotions. He would sit morose and take in the teaching, but then when all were dismissed for personal practice, he'd be out walking by the river or in the forest. I was eating a Twinkie over by the fence one day, hoping the extra calories would give me that much more oomph where it counts, and saw him walking by all hangdog and occasionally slapping himself silly, unfortunately on the face.

Of course you'll remember I have a secondary expertise in group dynamics, so I was very aware of the tension between Masturbananda and Unsettled, more from the latter's side since Master has pretty much risen above the selfish will. Master is merciful, but there's an aspect of mercy that allows the errant one to go his way. I could see the various dynamics at play and it broke my heart. I came that close to sneaking into Unsettled's room and hanging some pinups on his wall. The very least I could do was keep an eye on him.

Unsettled was drifting away, and we were at our wit's end on what to do. But "Each man to his work" was what the other chelas (disciples) always said, so we would quickly retire to our quarters. Master would smile on our eagerness to get to the work, knowing our momentary fellowship with the Divine was at hand, and quite literally so.

But where was Brother Unsettled at these blessed times? Off in the forest. Now, what I'm going to say to you is shocking and utterly personal. I don't want any of this information getting to Unsettled's family. In keeping an eye on him, I trailed him a few times. Lest anyone think I was being unfaithful to the work, let me say I wasn't; I cut off the bottom of a pants pocket, so I was able to do two things at once.

What I saw on those occasions was something I never expected, not in a million incarnations. Brother Unsettled was abusing his manhood, but not in the prescribed manner. He was rubbing it against the chain link fence, splintery boards, and trees. He even stole a cheese grater from the ashram kitchen! Even from a distance I could see it was a gnarly mess. But there wasn't any blood, meaning this had been his habit for some time. It appeared to be toughened, scabbed or calloused over. A few glimpses of such a horrendous sight, and I'll admit it, I felt myself shrivel up to nothing. So that's what he was doing! 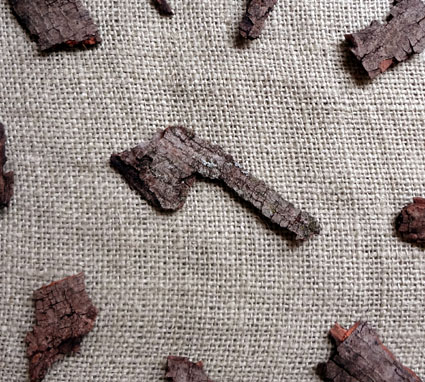 Friends, we're dealing with cosmic, spiritual, transcendental realities. And those in the know, know. I was startled to look across the way and see Sri Masturbananda also observing this terror. He intercepted me on the way back and told me it was too late for Unsettled. He was too far gone, and even then was being negatively transformed. Because of all the whacking against and rubbing against tree bark, day after day, he completely turned to wood, which of course is halfway to petrification, had he been able to take that next step.

Pictured above is Brother Unsettled's preserved wooden manhood, somewhat shrunken from its original size, being now about three inches. In this display, as an honor to his memory, we have surrounded it with other pieces of wood, commemorating his days alone in the forest.

The story obviously has a sad ending, but there is one bright spot. Found near Unsettled's broken wooden remains was a piece of wood that had apparently caught his eye, and very likely gave him what little pleasure in life he was able to enjoy. It is the hope of the brothers of the ashram that he experienced the Divine in whatever seconds of release he was able to experience with this yoni-shaped piece of wood. 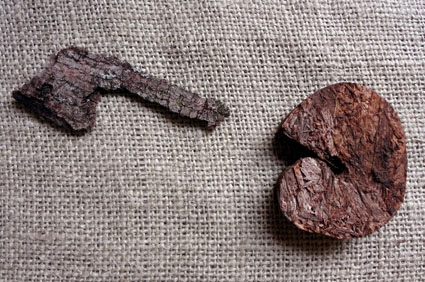 Posted by dbkundalini at 7:44 PM