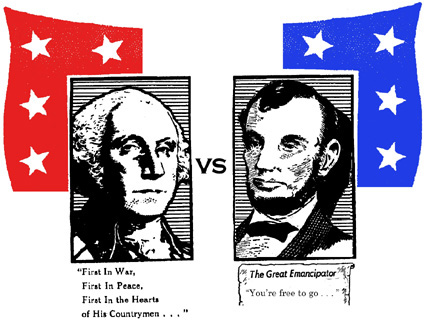 If you know the area, then you know I'm talking about the Washington Eagles and the Lincoln Panthers, two very proud rivals in sports. They're both always right on the verge of basketball and football championships, and if that ever happens ... I hate to think of it ... It probably depends if they're playing each other. Still, even if they're playing another town, the Washington kids wouldn't be rooting for Lincoln, nor Lincoln for Washington.

Like I said, they're huge rivals in sports. And things have gotten out of hand a time or two, meaning the rhetoric has gotten heated, and someone's going to get hurt one of these days, if they haven't already. I think the newspaper hushes up a lot of incidents because it can't afford to offend either side.

Anyway, there's been a lot of insults. But it wasn't until the Washington kids made up a sign for their pep rally that read, "Kill Lincoln" that the school boards got together and tried to bury the hatchet and demanded that all slogans be approved for good sportsmanship. But as far as I know they're far from stifling a lot of the deep hatred that is there on both sides. It's a very divided town.

Of course "Kill Lincoln" brings up the terrible memory of Lincoln actually being shot, and is in very bad taste. And since Washington died a natural death, the Lincoln kids couldn't retaliate in kind. But they tried doing something with the famous picture of Washington crossing the Delaware with a slogan of their own, "Sink Washington."

It's gotten very personal like that. The Lincoln students mocked Washington because of his supposed honesty, that he "can't tell a lie." And it makes a certain amount of sense that he would have lied if he thought he would get away with having chopped down the cherry tree. But his dad had only a limited number of honyocks in the neighborhood to suspect, so little Washington knew his goose was cooked.

The Washington students weren't much better. Picking up on their rivalry in town being like the Civil War, they started showing up at games pretending to own slaves. Since the Lincoln kids' greatest pride was their forebear freeing the slaves, this was the Washington kids taking that away.  Washington also made fun of Lincoln's lankiness and his need to try to hide his homeliness by wearing a beard. Lincoln of course had to respond, and did, by emphasizing Washington's wooden teeth.

Perhaps the strangest thing to come out of this bitter rivalry was the students' refusal to learn anything about their opponent's forebears. Lincoln's kids refused to memorize Washington's name, and vice versa, except to the extent that they needed to know them for various taunts.
Posted by dbkundalini at 4:21 PM