Curious About The Titanic? 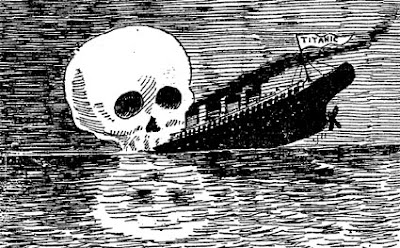 But seriously, let's think about it another way. The passage of time has taken away some of the rawness of the event. Really, there's barely anyone left who has a personal and immediate sense of grief over it, probably none. So we can't pretend like we're broken up about it. And yet, we can imagine, were it our loved ones, assuming we wouldn't ourselves have been aboard the ill-fated ship had we been alive in 1912, that the grief would have been horrendous. But as it is, had they not died on the Titanic, they would have been dead by now from something else.

I have an old, old story, but it's true. When I was a young man, and this was in 1964, so I was 11, there happened to be an old woman visiting our town who was a survivor of the Titanic. We all went to see her, me and the rest of the town. I stood in line around an hour, then it was my turn. But wouldn't you know it, she didn't speak English. So I had to talk to a translator who conveyed my message to her. Remember, I'm just 11, so I hadn't yet reached my present level of maturity; that would come two years later. I said, all quite innocently, "Tell her I have heard of the Titanic." The old lady, bless her soul, nodded and chuckled, then reached over and patted my head. I haven't washed my hair since!

Well, let's get to what you came for, a few questions you've sent in that I've researched and answered.

What did the Titanic hit? -- Good question, because it could've been anything. It was in fact an iceberg. It was with the Titanic's accident that everyone suddenly realized an iceberg was a dangerous thing, especially if run into. Because it's not just a soft snowball, it's a chunk of ice packed extremely tight, with most of it lurking under water. If you're ever the captain of a boat or anything, avoid icebergs.

Did the Titanic go down immediately? -- No, it was able to stay afloat till it sank, long enough to get off most of the passengers, although there weren't lifeboats for everyone. For those who didn't get a lifeboat, of course it was big trouble. But the good news is those who didn't die survived.

Was Leonardo DiCaprio really on the Titanic? -- No, he was in a popular movie about the famed maritime disaster [copied from Wikipedia.] The "Titanic" he was on was a smaller version of the ship made for the movie. Although it "sank" during the filming of the movie, ironically it would have been small enough to avoid the iceberg.

Are there any philosophical lessons to be learned from the Titanic? -- You mean like "Watch where you're going in life"? That's a philosophical lesson we already know. So if we take away something like that from the Titanic disaster, it's not really the Titanic teaching us, but our mere calling to mind prior knowledge. I seem to remember something like that when I learned about Plato, things we already know. To actually learn a lesson from the Titanic, it'd have to be something you weren't previously aware of. I can think of one very practical lesson: That every ship ought to be pulling a spare ship, just in case.

Well, we've now marked the 100th anniversary, with solemnity and dignity. And if you didn't see your question answered, these are the only ones we had space for. We'll hang on to them and hopefully get to them on the 200th anniversary. So keep checking, particularly as the 200th anniversary (2112) gets closer.
Posted by dbkundalini at 6:39 PM