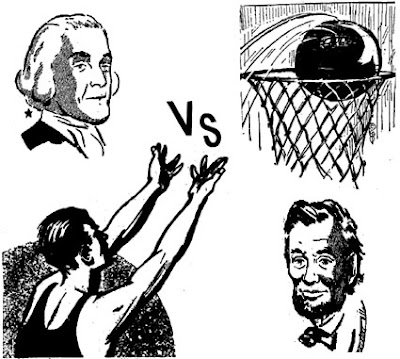 A good-sized crowd was on hand in the Lincoln High gym Sunday to watch the Lincoln Panthers edge the Washington Eagles, 56-54. The two presidential clubs faced off in this year's cager championship.

Enthusiasm was high as the hardcourt boys marched up and down the floor. The cagers of Washington took an early lead, in keeping with their namesake's primacy as president, but the lead shifted back and forth throughout the game.

Cager Wilt Redwood, Lincoln's big man, was their high scorer with a total of 16 points, by a happy coincidence tying their president's place in the list of U.S. chief executives. All the other Lincoln hardcourt boys put up points, with high-flying Hawk Sandpiper nearest Redwood in nested shots.

For Washington, their big man, the unhappily-monikered Abe Lanky, was the highest scoring cager, adding 17 points. Fans breathed a great sigh of relief when the hardcourt boy sank a late free throw to put him one over 16.

The other Washington cagers did their best in the losing effort, in part sparked by the torrid play of Kelvin Celsius, playing at fever pace. Zeke Denominator often found the bottom of the net, but was called for numerous infractions and fouled out.

On the Lincoln side, Phillip Nozzle pumped in a quick four points, fueling a short spurt. 4 foot 9 Al Soran was the low man on the boards with a single free throw.

The boisterous crowd was the sixth cager for each team. Tempers flared and the game was stopped three times to warn them against throwing hatchets and fake beards to the court.

Lincoln fans mocked Washington when their hardcourt boys lost the lead, holding up signs referring to the cherry tree, such as "Sharpen Your Axe!" and "The Tree Still Stands!"

But Washington fans gave as good as they got when the Lincoln cagers fell behind, their signs referring to the 16th president's arguably premature death, "It Only Takes One Shot!" and  "Sic Semper Panthers!"
Posted by dbkundalini at 12:34 PM