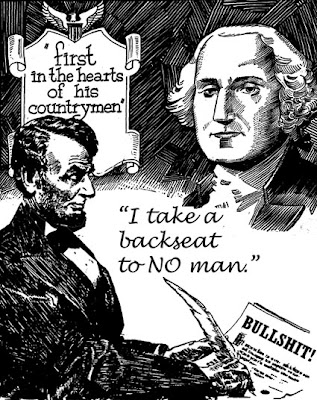 Ready for a freaky story, true in every detail, right down to the ectoplasm spewing from the lady's mouth? This happened just as I'm writing it, and it was just yesterday, so it's clear -- crystal clear -- in my mind.

I was at the Heaven bar for the championship basketball game between the Washington Eagles and the Lincoln Panthers. It was exciting, not just because we watched it on the big screen, but for the obvious fact that Washington and Lincoln are high schools from the same town. Meaning we were all mixed together, with periodic clashes, like with every lead change.

Thanks to Washington having cut down the cherry tree, of course the Eagles feasted on cherry pie. But because Lincoln isn't associated with any particular food, they were eating a la carte. This turned to the Panthers' advantage, because there's nothing Washington can razz them about when it comes to food. But the cherry pie thing can be deadly when Washington loses the lead, and they have to suffer the famous Lincoln quote, used as a taunt, "If I had eight hours to chop down a tree, I’d spend six sharpening my axe."

But the Panthers hate this taunt of Washington's just as much: "We should never despair, our Situation before has been unpromising and has changed for the better, so I trust, it will again." Lincoln sees in that a mean-spirited reference to the Assassination, Washington as much as saying, "Wait 'em out! Lincoln can't go the distance! He couldn't finish a stinking play, he doesn't stand a chance at basketball..."

OK, I was paying close attention to the game as it went back and forth and as the bar rocked with cheers, boos, and the occasional, but rare, flying hatchet. But there was something else going on in the bar. Every TV was tuned in to the game, every one except one, a small set in the corner being watched by local psychic Madame Sosotris. Always in touch with two worlds, she was watching Ghost Hunters.

For most of the time, those watching the game prevailed, as far as the noise, but the psychic was tolerated and semi-respected when she would periodically whistle and call for silence. We'd look over and hear a brief comment on her program, such as, "Grant just saw an eerie light at the end of the hall!" Then it'd go to commercial, and when it came back, she'd learn it was just Jason's flashlight. We'd go back to the game, only to be interrupted a few minutes later with a whistle and again the silence, "Jason just heard a thump in the wall!" After the commercial, she'd announce, "It was just Grant in the next room tapping the wall."

Everything was building to a climax in the game, Washington and Lincoln exchanging the lead as it came down to the final minutes and seconds. Hatchets and cherry pies were flying around the room, and a few of the Washington partisans had grabbed the fake Lincoln beards from the Panthers and were throwing them as well. Then as the last few seconds wound down, the score tied, Lincoln stole the ball from Washington and hurried down the floor for the game-winning shot.

It was pandemonium in the Heaven bar, total chaos, until it was amazingly broken and silenced by the presence of Madame Sosostris literally floating through the place, ectoplasm spewing from her mouth and the stuff forming enormous mounds wherever they fell. The Ghost Hunters show had actually hit on something important! She brought a message -- President Washington's concession to Lincoln -- channeled through Grant and Jason:

"There is a Destiny which has the control of our actions, not to be resisted by the strongest efforts of Human Nature. I shall not be deprived of a comfort in the worst event, if I retain a consciousness of having acted to the best of my judgment. We'll get these Lincoln bastards next year!"
Posted by dbkundalini at 10:37 AM