If These Walls Could Talk 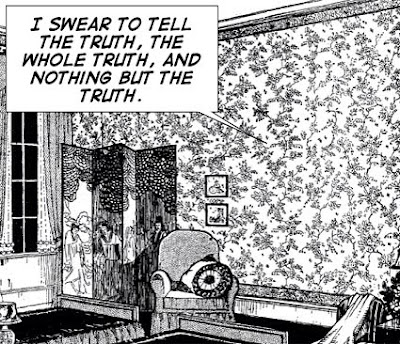 I was sitting in my hotel suite/office, staring at the wallpaper. Have you ever done this? I used to do it when I was a kid. I was always perplexed how wallpaper designers could match up the patterns so well. It was mesmerizing.

Being mesmerizing, it's easy to get lost in a reverie. That also happened when I was a kid. My mind would go almost blank very easily. As an adult, it's harder to do it now, to really concentrate, like what you aim for in meditation. I've had various theories as to why that is, mostly involving being old and not a child, being burdened with more responsibilities, having a brain differently developed, etc. But now I suddenly realize, it's because we just don't have as much wallpaper now. We need more wallpaper!

I like a good wall. Who doesn't? Although you never know what's going on behind it. Since I turned to a life of crime, I've been more and more paranoid about walls. Because how am I supposed to know-- the feds, the state police, the local authorities, or just a lone dick, might be back there. I have the place swept everyday with a bug sweeper, but the bug sweeper might be sweeping with the enemy.

And God knows I'm guilty of enough crimes! It'd be an insult if they weren't at least trying to listen in. Right now, sure, all I really am is the head of the Organization's prostitution operations, but that doesn't mean I don't poke my nose into everything else I get a whiff of. I lead the big diamond heist, I tried to corrupt professional wrestling, I killed the Ciggie outside of Tastee Freez, and the kid crapped on the police chief's desk at my instigation. Not a bad month's work!

I stare at the wall. The whole reverie thing kicks in. My eyes cross and I see the pattern of the wallpaper merge, a piece from over there with the identical piece over there. It's playing tricks with my eyes, my mind wanders. I start thinking, "If these walls could talk," as the old saying goes, "what might they be saying?" I might be out on a job and an investigator drops in. I come in and catch him, and I have no idea how long they've been chatting. One of my pictures is crooked, indicating something.

Next thing I know, someone higher up shows up with a warrant, and I'm very twitchy, looking guilty as hell, but really more afraid of what the wall might say. "I was standing right here when Machine Gun Ricky Wayward was blackmailing Rutledge!" The thought's crazy, but in my reverie I'm thinking, "I'll kill you, and I'll kill this entire room if you open your damned mouth!" Finally, they do get me, but there's no witnesses, at least none in the flesh. And yet, the prosecutor brings in a surprise witness, a chunk of my wall, swearing to tell the whole truth. The whole truth! That'd sink me!

I realize what I must do. I must get construction workers in here and take out that damned wall and put in a new one, one that's soundproof. When that's done, only then can I plot and plan and do whatever the hell I want, and nobody will be the wiser.

And -- I'll be able to idle away the hours with my guitar and harmonica, knowing no one can hear me. Because I'm so bad it's embarrassing.

RICKY'S FINAL WORD: I'm really glad the foregoing -- what you read, and will probably re-read -- is an imaginary story. It would be an obvious bastard, not just to me but the entire world, if our walls could actually talk. I really didn't want to get into my own sex life, but other than my crimes, of course that's the first thing I think of. And if the walls could talk! Whoa, Nelly, bar the gate! They'd be describing things best left even out of the imagination. A mental group grope, perhaps, I'm not saying what all it'd be, except it wouldn't be a description I'd be proud of. Struttin' my stuff, such as it is.
Posted by dbkundalini at 5:05 PM