The Pop Goes The Weasel Killings 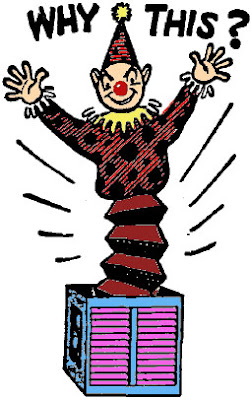 As a crime boss -- Hi, Machine Gun Ricky Wayward here, boss of the Skids organization, centered in the Skidrow district of our town -- I have many talented underlings at my disposal. Pickpockets, arsonists, snipers, bookies, scientists, prostitutes, drug runners, pool sharks, bootleggers, and a couple of IT kids who can get any illegal MP3 download you want. What a team!

I had an idea for offing some of my worst enemies. I want to terrorize the crap out of them before their death, to make a more sinister and memorable reputation for myself. I myself could do the same old same old, walk up to a guy and just kill him. The big trouble there is they're not exactly going in their pants for fear, and that's what I want. I want, I demand that the name of Machine Gun Ricky Wayward strike absolute terror in my victims.

That kind of reputation is what I need to take over the entire town. Skidrow of course only rules over the central part of town. The rest is divided between four other gangs, The Aristocrats, The Outlaws, The Ciggies, and the ethnic El Conquistadors. I want to loosen those bozos' control, their iron grip, and make it all mine!

OK, anyway, I'm busy thinking, what are some of the scarier things in life? Clowns, zombies, midgets, carnies, gypsies, psychos, teenagers, fundamentalists, hoarders, repo men, and last but not least, jack in the boxes. Then, of all these, which could you trust most? It'd have to be the one non-human thing, the jack in the box.

I've always thought, since I was a little kid, there's no more mysterious toy than a jack in the box. Because there's pieces in there you never see, forever enclosed and hidden under the jack. It's a hiding place. You could retrofit one of these to be a weapon of mass destruction. I said it 10 years ago, and I'll say it again: Saddam Hussein would still be in power had he only catapulted jack in the boxes at the American invaders!

God, I'm shivering even at the thought of a jack in the box. I can remember my heart racing when I heard "Pop Goes the Weasel" and knew the damned thing would erupt in my face. Now, what if it's full of explosives, what if knives suddenly jut forth and the thing flies around the room, or what if a massive blast of poison spews forth from the jack's mouth? You'll be dead!

So I gave the boys in the lab a bunch of jack in the boxes, and they've been working with them. They're making great progress rigging them up. Different variations, just like I said, with explosives, knives, a machine gun, poison, a canister of muffler fumes for asphyxiation, a Star Trek phaser (which in testing never seems to work), battery acid for spewing, a heat-seeking noose, a poisonous monkey's claw, meat infected with rabies, rubbers tainted with VD, a jar of fumes from a grill used indoors, cancerous organs extracted from cadavers, and, to make it really deadly, a DVD of the Republican debates.

Imagine that. You're one of my enemies. I have an underling put a jack in the box on your desk, then we quietly seal the room. You're looking through some mail and -- WHAT?! -- you hear the box start playing "Pop Goes The Weasel." You know approximately how long the song is -- something like 7.1 seconds -- before the jack pops up. Only long enough to frantically rush the door, then finding it closed, start your final prayer, "Dearest Heavenly Father--", then POP, and poison fills the room. You gasp, you feel your head quickly bloating, you claw the desk, your eyes are bulging, you feel your heart slow, then it stops with a sad whimper, and you think your last thought. Your very last clear thought is one of God's grace and happiness: "At least it wasn't the DVD..." With that, you're dead.
Posted by dbkundalini at 11:03 AM