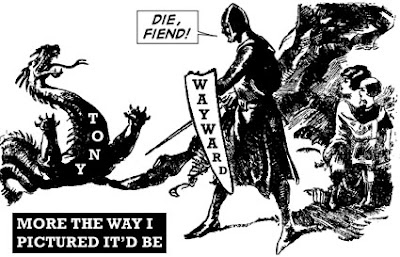 Well, I said I was going to kill Tony -- Mr. Big of the Organization -- and I did! So now that makes me, Machine Gun Ricky Wayward, the new Mr. Big.

Here's how the whole thing went down:

Tony was ensconced in his office, as expected. I put my gun together and went up to his floor. The eight divisions, the gauntlet of guards, lined the hall -- The Shivs, The Battalion, The Hangmen, The Pulverizers, The Psychos, The Mincemeaters, The Republicans, and The Ethnic Slurs. I knew my way was well-greased, thanks to all the ducats and material goods distributed.

I passed through, walking very confidently, then I started noticing a bunch of grins. But were they good grins or bad grins? Were they with me or against me? I felt a trickle of sweat on my forehead as I realized I might be walking into a trap. What if I got to Tony's office just as these bulls closed in on me, to kill me, and perhaps abuse my body? By now I had no choice but to keep going. To turn back meant I was dead anyway.

Finally, I got to Tony's door, knowing this was the moment of truth. And it turned out I was worried about nothing. The last couple of guards kicked in the door and motioned me in. I pulled up the gun, and was ready to blow Tony's head off without a smile or a word, certainly without mercy. Then I saw what they were grinning about, Tony's bullet-ridden body was in a heap in the middle of the room. The guards themselves, in a gesture of loyalty to me, had killed him themselves. I felt a little pissed off to be deprived of the pleasure, but what am I going to say?

Seriously, this wasn't anything like what I pictured. I was hoping, you know, maybe Tony and I would struggle and the gun would go off. Then he would flee to the window, having planned his escape in a situation like this. Out the window he would go, closely followed by me, and up the fire escape to the top of the building. Then a helicopter comes down, and Tony's grabbing at the landing gear, without a second to spare, and they lift off, me shooting like a madman.

He might easily escape were the pilot to whip the machine around and take evasive action. But I'm relentless, knowing if he escaped, I'd be finished. So there I am, aiming carefully, with time for only one last killer shot. The bullet goes through Tony's head and also pierces the copter's fuel supply -- the equivalent of the machine's lifeblood. The whole thing bursts into flames, Tony's on fire, and everything explodes and crashes to the ground, debris spreading over the courthouse lawn, with pieces later found as far away as the next county.

To have him simply heaped there in the room, thanks to the guards, seemed very anticlimactic. And I wanted to give them the biggest ass-chewing they'd ever had. But all I could do was offer them my thanks, a smile, and a few high fives. The lummoxes meant well. And being the new Mr. Big means taking caution where caution is due, which is not to say I won't throw it to the wind tomorrow. So my decision was to celebrate Tony's demise as the guards' gift to me.

But here's the rub. I'm thinking, If they'd do this to Tony, they'd do it to me. So we're not through here! But, again, I must leave that for later. For now, I need to keep a low profile. With the helicopter debris and so much destruction, and Tony's bullet-ridden body blown all over the courthouse lawn -- it's all very conspicuous -- the police investigation will have a lot of urgency. At the very least, there will be the appearance of all due diligence. The sons of bitches will be loaded for bear!
Posted by dbkundalini at 1:32 PM