Where's All The Old Timex Watches? 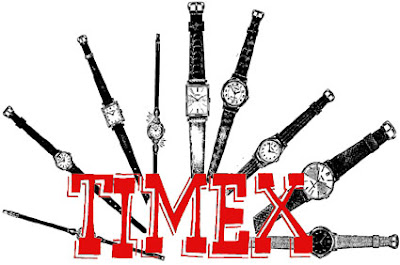 Hey, great news! I just thought of something to be mad about. In this case, from long ago, back when Timex watches ruled the wrist. I'm wondering, Where are all the old Timex watches? Like everyone, I remember their slogan was "Takes a lickin' and keeps on tickin'."

I probably should look it up. I would guess Timex is still a company making watches. Assuming they are, it's curious we never hear of them, when a long time ago when I was kid, that's about all you ever heard. Three channels on TV and Timex ads all the time.

Have you seen the Ed Sullivan DVDs of the Beatles' appearances? They're still available. I saw them a few years ago. Timex ads! They left them in, with the guy, I believe John Cameron Swayze, putting Timex watches to various torture tests. Like strapped to an outboard motor, to a cannonball slamming against a brick wall, and under an elephant's foot that's running across a large asphalt parking lot. Or something. And each time it comes out OK, still ticking!

All of it makes me wonder why all the Timex watches I got as a kid -- virtually every Christmas and every birthday -- quit working under normal conditions. They could handle the cannonball, but normal usage was too much. Back then, though, -- I don't know what my problem was -- I don't remember ever contemplating the dissonance between the ads and reality. What it was, was I was happy enough with a watch and happy enough without one. I was a kid, what'd I ever need to know the time for?

The great thing about Timex watches for adults, it turns out, was they were fairly cheap. And despite the slogan, they broke often enough that you always needed a new one! So it was an easy gift choice. The whole thing about "Takes a lickin', keeps on tickin'" was with a wink-wink to the adults.

If anyone doubts what I'm saying, go to an antique store or flea market. And you tell me how many old Timex watches you see that still work. Actually, you're not going to see very many that don't work, because we just threw them away...
Posted by dbkundalini at 9:02 PM