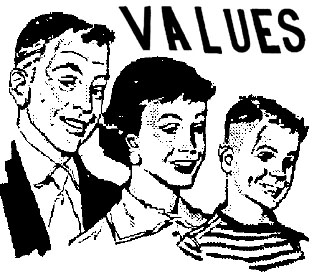 I've always been a values guy, even back before I turned to a life of crime. You might remember me at some of the school board meetings. I was the guy who lobbied and won against the girls' basketball team wearing shorts. It was way too distracting for me and other red-blooded American men. So now we have the only team in sweatpants. I see it as a distinction.

Other than that, I learned lots of other good values growing up, like looking both ways before you cross the road. Not only is it the safest choice, it keeps drivers from going ballistic and honking their horns and waking up Dad, and saves you the beating of your life. I'm trying to think of some of the other values I learned, but I'm drawing a blank. Oh yeah: Wash your hands before meals and after going to the bathroom. For years, I did it the other way around.

Now that I'm in crime -- Hi, Machine Gun Ricky Wayward here -- I still conduct myself according to good values. And they still do me a lot of good. And that also goes for the guys in the outfit who happen to have rug rats who need to know how to live.

A deal's a deal -- You hear guys complaining, "We shook on it. A man's word is his bond." To me that's a wimpy way to handle it. Instead, simply stand on the truth, "A deal is a deal," and if the other bastard doesn't follow through, put a knife in his back, maybe he'll get the point!

Bring the hammer down -- No one gets anywhere in life with half measures. And that's especially true in crime. You have something to accomplish, get it done! You've got a job, something important to do, like offing some guy: BOOM! It's done, no delay. I might call this the principle of the Texas driver: There's two speeds, 0 and 150.

Keep your mouth shut -- I've always been able to keep confidences. And that's part of my life now. I have enough shit on people to put them away for a very long time. The mayor, the police chief, a couple ministers, various pillars of society, etc., not to mention other criminals. But I keep my mouth shut, and so anytime I need a solid, I have it.

Take time to schmooze -- This goes with keeping your mouth shut. People need to know you. Half your success is your connections. So you're schmoozing, showing confidence, a good spirit, a sense of joy, and, yes, ruthlessness. They'll know better than to pull a double-cross.

Trust your instincts -- Go with your gut, your instincts. A great example of this happened when I was schmoozing the other day. I was with some folks at a meeting and I just "sensed" someone was behind the curtains, waiting to ambush me. So I whipped out my gun and shot six rounds. Damned kids shouldn't have been playing back there!

Others are depending on you -- We're an organization, a team. If you fall asleep in the getaway car, you've hurt the whole team. As long as you're alive, we're in this together. You want to be on your own, stiffs are buried one at a time.

There's no second chances -- Get it right the first time. Don't come to me on your hands and knees. I don't want to hear it. And I'm not going to tell you twice, because that'd be a second chance.

No one likes a stoolie -- If you're a stoolie, just tell me now, because there's no reason for you to be wasting air.
Posted by dbkundalini at 7:03 PM