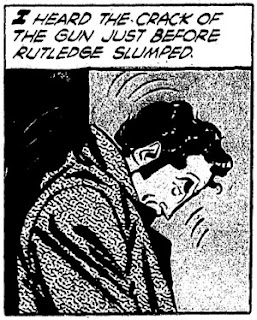 This is a shocker, let me catch my breath... Rutledge is dead. Shot in the back. Bled to death. They dumped him in front of the hotel. Someone noticed his body. All hell broke loose.

Let me say, I'm very upset by Rutledge's death. Say what you will about guilt complexes being bad, I can't help thinking I'm somehow -- at least remotely -- responsible. Before you pat my back and poo poo my thoughts of responsibility, please hear me out. I'm the one who blackmailed him two times as a joke. Of course he wouldn't fall for it a third time.

The terrible thing is: The third time wasn't me, and it wasn't a joke. But he thought it was, so he responded by dismissing their demands, resulting in the present catastrophe, a bullet in his back, the consequent loss of blood, which was entirely necessary for his ability to live.

How do I know all this? Of course I couldn't know it. But it came to me as soon as I saw Rutledge's dead body, that he had to be the victim of foul play. Could it be suicide? No, a man shooting himself in the back and dumping himself outside a hotel is extremely rare. I had to find out what happened, and I wanted to know right away.

It is in a moment of crisis like this that I'm at my best. I've always been that way, and it's something of a source of pride. Once as a boy I lost my homework -- it was a very windy day, and there went my papers out of my hand and across a muddy field! The average first grader would've panicked and figured all was lost, and just take the failing grade. But I leaped into action, going over the barbed wire fence in one bound, like a seasoned track and fielder. And through sheer will, I bounded through the mud, brambles, and over a creek raging out of its banks. I dove on the homework, wrestling it free of the wind's grasp. Long story short, I managed to get a C instead of an F.

But enough about me. I saw Rutledge's body and once again dove into action, telling everyone in my path to get the hell out of my way. I called in my best boys, the ones with connections in all the town's gangs. I have to tell you, I was so flustered -- running strictly on will, two parts will and one part adrenalin -- that I wouldn't take "I can't" for an answer. "Find out what happened to Rutledge! Get back to me within the hour or you'll join him on the sidewalk!"

My demands were met, but they had to give it their all. A couple of guys came back injured, broken arms, black eyes, and one guy was shot in the leg, giving him a painful limp, even painful to look at. But they had the answers.

I winced when the story came out, just as I feared. They tried to blackmail him, but after having been blackmailed twice as a joke, there was no way he'd accept it as the real deal. Rutledge laughed in their face, ignoring every threat and scoffing at the idea of paying a single cent. He reportedly was looking for me behind the curtain, opening closets, trunks, and, not finding me, speaking loudly to the dark corners of the room where he figured I'd be watching on video camera.

And it really hurt when he was proclaiming loudly that this was "the last straw" and that he'd kill me with his bare hands when he caught me. There'd be no more laughs at his expense. He was "finished, through, done, sayonara, arrivaderci, adios, goodbye Ricky Wayward, may you rot in hell!" The gang that had him had two thoughts: 1) He was certifiably insane; or, 2) In some other way, not clearly known, he was "dissing" them, and bloodthirsty gangs don't care for that.

They'd tied Rutledge's hands with a rope and had him hanging from the rafters and there he was spinning. Surely this would bring him to his senses that it was no joke! But no, he shouted out defiance of me as he spun. "There's no way you're going to fool me again, Wayward!"

They dropped him back to earth and took him for a little ride. They hung him off the side of a bridge, so far down that his head was going in and out of the river. Up and down, back and forth. But would he give in? No, he used what power he had left to curse me, "Give it your best, Wayward, you bastard! I'll never give in!"

Finally, they took him to a cheap motel, sat him in a chair, and turned on Jerry Springer. With this greatest torture, he was muttering something like, "All right, Wayward, you win," when some strength, undoubtedly unknown to him before, brought him to his senses, and he refused, saying, "Wayward, you can't break me!"

In short, the gang saw they'd never get anything out of this crazy man, who, from their point of view, had no respect for the whole blackmailing process. Of course they didn't know about the recent blackmail jokes. All they knew is they were getting nowhere fast, and the longer it went on, the worse it would be. Leaving them no choice but to kill him.

The last part of the story went like this: "Wayward!," he cried out, "your guns don't scare me. You say it's a joke, you bastard, but this time the joke's on you!" With that, they shot him. A witness told my boys, "I heard the crack of the gun just before Rutledge slumped." And the rest you know, they dumped him out front.

Later, I went through the hotel and was able to collect almost $100 for his widow, who doubtless deserves so much more. But life is sometimes unfair, like that time my homework blew away. The mud that day was treacherous, but somehow, through indefatigable will, I got it back, and received for my labors a not half bad grade, a B+, I believe it was.