Was Tony A Well-Rounded Character? 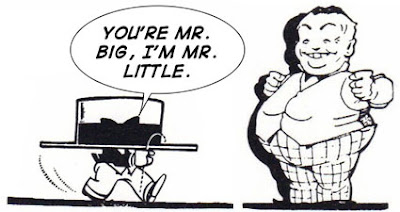 A couple of you -- the vocal minority, always the ones hardest to satisfy -- have written in, saying you didn't feel Tony was a well-rounded character. Meaning that, according to you, what I said about him was very generalized and one dimensional.

My first instinct is to say, "This is what I have to worry about?" But then I think back, and in my defense, I said he was a son of a bitch*, and that's exactly what I meant. I mean, really, what more can I say? Like the rest of us, he lived, he did stuff, he died. Whether he had brown hair, red hair, or no hair, or a particular slope to his nose, or chiseled features, or a worried brow, or even a last name, it doesn't make any difference.

Of course they'd say he was Mr. Big, and must have been an interesting character because of that alone, so they're naturally curious. Couldn't I flesh him out a bit more? And I agree, to a limited extent. I didn't really say much about him, except his name was Tony, that he called me to his office, he gave me oversight of the prostitution operations, he had complete control over things, he had a large guard contingency, and a couple of other details, perhaps, and that he apparently reached several climaxes in the course of an average day.

By that, I didn't mean to imply that living on the floor above a brothel means a guy is necessarily oversexed, but Tony was Tony, meaning he was known occasionally to have a good time. The climaxes were his outlet. I'm not judging. If he had a target on the ceiling, that's his business. Anyway, if living one floor above a brothel means you're oversexed, what about me? I live on the same floor. And I'm pretty chaste. But for some reason people aren't writing in asking more details about me. Maybe because I am so chaste. So now I know what's on your dirty little mind!

Actually, most of the reason I didn't say more about Tony's life is that this is real life. It's all true. I'm not darning a literary creation here -- satin and lace and frilly, flowery prose to satisfy women and fops -- no, this is documentary fact. Of course, I suppose it could be spruced up and spit-shined a bit, to make it fancier. But who cares? I've always been a man's man, preferring to let facts speak for themselves. I can't get bogged down in details like what color a man's hair is, his profile, his interests, and relationships. Tony was a son of a bitch in life, he's a son of a bitch in death, and it's not like he ever wanted to know about you, so why do you care about him?

Okay, to satisfy your idle curiosity: Tony was not just a son of a bitch, he was also scum of the earth.