I was meaning to make a return visit to the industrial section of town yesterday, then I let time get away from me and it never got done. Maybe today.

I'm thinking back to that time several years ago when I was out there nosing around, which I took the picture of the yucky barrel (posted yesterday). The way I remember it, I wasn't overly concerned about video cameras at the time. But now I'm extremely paranoid about video surveillance, because I believe they have it in the industrial section.

So let's assume I'm back out there nosing around, many video cameras on many corners of buildings, perched on a swivel base for wider surveillance, will be watching and recording my every move. Sensors would be activated, meaning that an alarm, unheard to me outside, would be going off, maybe several, and there would be officials of the various companies in that area watching me. Next, I would imagine, they would alert the police and next thing I'd know I'd be hauled in for questioning, booking, and arrest.

You don't have to be a criminal, technically, for the police to harass you, all at the instigation of the moneyed powers that be who finance and oversee the industrial section. Having the money, they're able to pay off everyone to keep their industrial secrets to themselves. But the truth is, I'm not looking for secrets or an expose in any of this. I just want to understand for my own enlightenment the ways of the industrial section in modern society,

Were I to be seeking an expose, that would be a worthy goal as well. And maybe I'll fall into an expose and eventually get the goods on these guys, even though that's not my goal at this time. I can see it happening, I guess. It's part of my imagination already, whether it'd be a pollution scandal, an animal abuse case, some kind of workers' safety issue, or even something to do with human cloning out there -- at this point I don't know what's going on. Of course I have my suspicions.

I don't know what kind of expose I might get. I do know there's hard water and there's soft water. And I believe that nuclear power plants have some kind of rare earth, rare water component to them, which would make for a nasty run off situation were it to get in our drinking water or aquifer. But there's no nuclear power plants in the industrial section where I live. At least none has so far been proved. As far as we officially know, those kinds of shenanigans aren't taking place. Still, the water in that funky barrel yesterday keeps haunting my dreams. 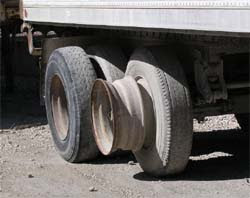 But how do I get around the video cameras? And if there's video surveillance, there's surely going to be sharpshooters, who are paid off not to talk. A few dead bodies, what do they care? If I die while nosing around out there, at least this blog exists, letting people know that I came to a bad end in the pursuit of justice. I have no known enemies, none out in the industrial section that is. But you can only push some of those industrial types so far.

On another subject, I wanted to call attention to the tire on this truck. That's the kind of access I had a few years ago when I was out there nosing around. Obviously I got in good and close. That wasn't taken from a distance, just the distance between me and it.

The thing to mention about it is this: You don't see tires like that anywhere except in the industrial section. When they're on the road they have all their tires. It's only when they get to the industrial section that they start stripping away all the facades, as they hide behind a different facade. This particular tire, the wheel thing sticking out, reminds me of some of the shenanigans that went on in the movie Ben Hur. But I have nothing more to go on except simply the allusion.

If you stood on that wheel thing while the driver was putting it in first and then reverse, you could do one of those things like they do on a log roll in the water. It'd be terribly dangerous. But danger's what the industrial section's all about.

I might go out there today and I might not. If you don't hear from me ever again, it will be because I did go out there and was pushed or fell into a vat of something.
Posted by dbkundalini at 7:55 AM