An Industrial Section I Never Knew

I've been so wrung out lately about the industrial section of my town. Reading my posts and being in agreement with me, you can well understand and appreciate my ready tears. It's been a period of my life in which I have been notably distraught, perhaps unlike any other time since Grandpa unexpectedly bit the dust.

Thank you for your words of concern and prayers, and for joining me in this fight. This much we know, that maybe we can't do much about the various industrial sections in our towns -- they're such entrenched interests and players in the community and society -- but we can hope, even against hope, that maybe something can be done about them. We are agreed on this one thing, that they are a sprawling blight on our world and the many towns in it.

Yesterday, I was thinking I could go out and nose around a bit more. Then it suddenly hit me, again the sense of despair. It's been the dark night of the soul for me over this and, even though I'm a guy, I have shed more than a few tears over it, as already confessed to above. I decided I would not go nosing around, because what would it gain me? I'm already a wreck over it. Do I really need the extra burden that comes from seeing everything perk along as it always has? 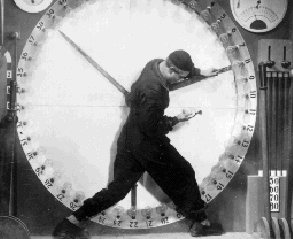 Even from my home I can look across to the sky and see the black smoke continually belching forth. That's nothing new. Just another day in paradise. In my mind's eye I can see thousands of workers dutifully shoveling raw and recycled rubber into the maw of the beast, with the fumes reaching out occasionally and pulling one or a handful in. Others are lined up, their time card in hand, ready to punch in on a moment's notice to replace them. It's just like in the old film Metropolis. I can see other workers with their arms up against big swiveling levers, looking like human clocks. They've got to keep everything in sync or the whole thing will belch downward and they'd be consumed in a flash, before they could say goodbye to their families and pay their final bills.

So I decided to get in my car and just drive. Where was I going? I didn't know. I left a biscuit by Grandma's bed and a cup of milk in case she woke up. Then I drove like a madman, keeping my car in my own lane and adhering to the speed limit. The longer I drove the more distance I covered. In fact I covered so much distance, I looked way back and didn't see the place I started from. The car seemed to have a mind of its own, responding normally to my foot on the gas, the brakes, and my normal usage of turn signals and other components. When I went west, as I did for a while, that was achieved. Then I turned and went south.

Going south, my mind started to clear. Then I saw, looming over to the west of this particular south, a big, unknown industrial section come into view. There was no exit ramp or I would've gone to nose around. So I was only able to observe it from the road. I recorded on my phone what I saw, thinking I would refer to that to describe it. But since it was just yesterday, I believe I can reconstruct it by memory:

I saw the usual massive buildings, all very intricately designed, as the buildings form together a complex, all geared toward a common purpose. In this case I believe it might be the making of electricity. Why do I think that? That's a good question. But I saw piles of coal, acres of it. Then all the towers, augurs, strung lights, truck ports, exhaust fans, pools of water, and chutes and ladders that go along with that work. We think of electricity as being made cleanly. But coal? That's not clean. That's filthy stuff. I used to pick up a piece on the railroad track and you'd get coal dust on your hand that was there for a week! Pork may be "the other white meat," with chicken, being both meats. But coal-produced electricity and wind-produced electricity are not comparable. Coal-produced electricity isn't "the other clean energy" by any stretch!

Later in the day, after shedding a few more tears (I worked myself into it this time), I went back home. I swore I wouldn't use electricity until the next day, and so here I am.
Posted by dbkundalini at 8:37 AM