Again, yesterday, I meant to go out and nose around the industrial section of town, to get the real scoop about its affairs out there, but time issues prevented me from doing it.

However this is my solemn pledge and vow to you, I will eventually make it out there. And when I do... 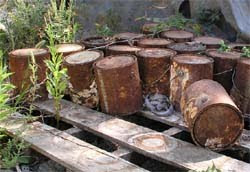 When I do, I fully expect to see things that will curl your hair. Including the usual industrial section sights, such as rusty girders, metal doors that don't fully shut, strange paint jobs on tin buildings, things piled up with weeds growing all around the base, broken concrete blocks scattered randomly, paint cans on pallets, weeds along the side of the road sucked down in the dirt (from passing trucks), dilapidated outbuildings, abandoned gas pumps, and guard towers.

When I get there, I know, of course, that I will see the signs of industry, steam coming out of everywhere, trucks waiting in the line, trains creaking along and coupling loudly, a forklift buzzing in and out of traffic, a dump truck beeping in reverse, lots of pickup trucks parked in a fenced in parking lot, and heavy duty dumpsters.

If I'm able to nose around without being spotted, and because of video surveillance that is not likely, I will be able to dig a little deeper, looking for some kind of scandal to exploit. But because they're always on their guard, it will be more likely that I will only catch hints of possible wrongdoing, leaving me with no proof and just a lot of wild claims. That's how they're able to elude the law, that and the economic clout they wield in a community that alternately hates and loves them.

Like I said, time was an issue for me the last couple of days, which is why I didn't go out. I've just been very busy. But I will make it. I'm willing to do my part to get it done, and, who knows, maybe we'll be able to bring these guys down and reclaim the industrial section for more parks and to make it a more family friendly part of our town.
Posted by dbkundalini at 7:40 AM