Yesterday I was very bold. Remember what I said about seeing a deer's head out at the industrial section of town? Then when I retraced my path I didn't see it? I started thinking maybe I'd just missed it in my hurry and worry about the guard towers. Well, yesterday, I went out again looking for it.

For the most part I was hewing close to the residential district, with my excuse completely memorized. I could recite it like a robot, "I'm looking for a friend's house and must've gotten lost." Then at the last possible second I veered off and made a direct line for the place where I saw the deer's head. 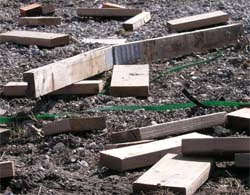 My senses were very honed yesterday. I was trying to put out of my mind any preconceptions and distractions, looking only for the place that my memory would say was it. I passed the mushy place where I took a picture of some miscellaneous boards.

At first I thought maybe the powers that be had cleaned them up, because I didn't see them at first. By now it was just a marker to me that let me know I was on the right path. Had they removed them, that would've made it tougher. But there they were!

A turn there and I was getting closer.

I had two big hopes. One, that the deer's head would be an artificial deer, like a lawn ornament, in which case it would likely still be there. If they didn't get rid of the boards, then it's likely the deer would still be there. And two, that if the deer's head was an actual living deer, it would still be there. But since deer range far and wide, it occurred to me that it might've gone somewhere else. My big hope was this: Since it had rained all day, maybe he would come back to this same spot looking for a puddle to drink out of.

I found the definite spot, which I knew conclusively could be no other, and I turned in. Just checking my mirror, no SUV behind me. Now, being far from the housing district, my excuse if caught was going to be, "I'm a nature lover, and someone told me he saw a deer back here once." Admittedly that's pretty lame, but you have to be ready with something. The guards may be ruthless, but I'm assuming they'd send the stupid ones out first.

There was ... no deer there! And I didn't see any puddles either. The rain had soaked in, making a darned good reason why the deer would be looking for water elsewhere. But what I did see -- and I hadn't noticed this before -- literally curled my hair. I was in the parking lot of a crematorium! This is true! They put crematoriums in the industrial section now?!

I didn't look for the deer any longer! I got the heck out of there! The deer is probably ashes by now! Like I was going to be if they caught me! I felt a terror that I've never felt before! Because now I realized that's why I've never seen anyone else out there nosing around the industrial section: Anyone who does is immediately captured and cremated! Including wildlife!

I drove back toward the housing district, looking neither to the left nor the right. I'm looking for a friend and must've lost my way. Won't someone help me find my friend?
Posted by dbkundalini at 7:25 AM