The Industrial Powers Shall Receive No Apology

This is my sacred vow to each and every one of you, that the industrial powers shall receive no apology from me!

How I hate the rich and powerful, the higher echelon industrial powers, who keep "We The People" under their heel, heedless of our desires as fellow citizens. To them, it's all this: what's in it for us, how can we profit off of someone else's misery? Has someone looked at us cross-eyed? Can we make that miserable so-and-so pay for it the rest of his pathetic life? And questions like that.

So where does that leave us? To them we're simply dirt under their feet. So that leaves us vulnerable and submissive to their selfish desires.

I can guess what the industrial powers were like as kids, the kids who put firecrackers under living creatures. Then they grew up to manage the businesses at the industrial section of town. They're sadists, very sadistic. That's been my experience over the last couple weeks.

My supposed crime, beyond exercising my freedom of speech as a taxpaying American citizen: Calling into question the behavior of the industrial section of town, all the way from exploiting our natural resources and blocking out the sun with the smoke from their pollution to allowing trucks to speed by and suck the weeds and grass down into the mud. It's very unsanitary.

So what did I do? As you know, I went out to the industrial section a few times, nosing around, taking pictures of some of the evidence: A pile of limbs, some pallets, a few chain link fences, etc. Along the way I saw what I thought was a fake deer staring back at me, that, by its absence later on, appeared to prove to have been an actual deer with no relation to the industrial powers or their ways. There's barely any reason to keep mentioning the thing. I figured it was thirsty. I believe it's still alive somewhere, perhaps in a thicket somewhere still looking for water. 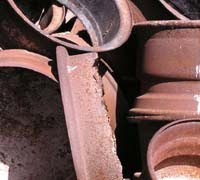 That's what I did! That's all I did, nosed around a little and wrote about my experiences. Some grass, some weeds sucked down into the mud. And a few rusty buckets or tire rims, which I believe I did not show because they were not in the industrial section proper but in a city park. Anyway ... you'd think that would be within my rights as a normal citizen, but nooooo!

Now I'm reduced to various underhanded stratagems to post my blog, having taken to dressing up like an old woman and sneaking out. The industrial agents in the trees are oblivious to it, and most of them sleep right through my comings and goings. So that's a helpful sign. And as long as no one alerts them to the "facts on the ground," I'll keep right on doing what I'm doing. I hate to be devious, but they've left me very little choice.

Some of this, I realize, is navel-gazing, but you have to take your pleasures where you can find them. And these are mine, as they stand right this minute.
Posted by dbkundalini at 9:17 PM