The Billionaire Buys My Easter Bunnies 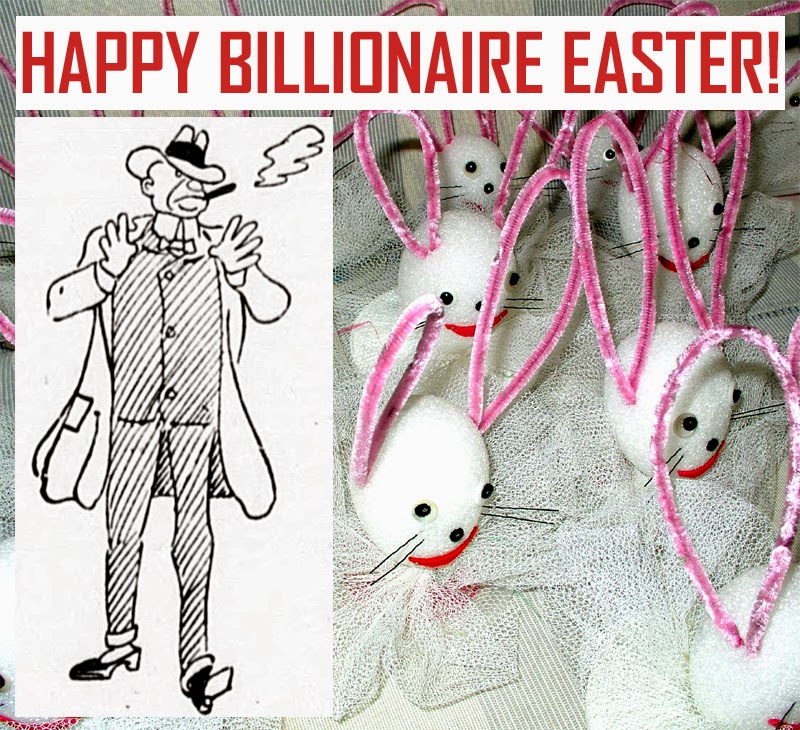 Easter Sunday is coming, the day I celebrate above all others, a great and glorious day, the day I enjoy my profits from selling Easter bunnies at the craft sale. The sale, this past Saturday, was especially great for me this year, giving me a lot to rejoice over, and it's all thanks to the billionaire.

Wow, I'm in awe, to think I met such a rich man -- an actual billionaire -- a guy with more money than I'd ever know what to do with. This isn't going to be the same old Easter now, thanks to him. The wealth that guys has, it boggles the mind. And to think, he's not afraid to get out and spend it, thank God!

It all went down just like I'm saying: I made up 50 new Easter bunnies and with my hold-over stock trudged sullenly to the shopping center, dreading the usual dismal sale. Those bastards, the shopping center management, are always looking for ways to stick it to us. And it was the same this year. They put us in the opposite wing, where the bathroom's three times as far. That's bad for a guy like me, a solo act, meaning I have to leave my stuff at the mercy of criminals and cutthroats to pee. There's enough thieving kids at the shopping center -- wild animals lusting to steal -- that it's tempting to sacrifice your bladder to protect your stock.

I looked up at the crowd gathering at the line in anticipation of the starting pistol. Three old ladies with empty plastic sacks looking for free samples and no pistol. Big encouragement! But thankfully things did pick up, a few stagglers here and there. Being slow isn't terrible; it cuts down on shoplifting, and of course the ever present threat of other backstabbing crafters wanting to get illicit photos of your stuff. It can be a mess except for some downtime.

I also use those opportunities to keep my table tidy. I have an eye for posing the bunnies, positioning them for maximum appeal. Angled out, a few about an inch from the edge of the table. It shows they're eager to go, looking for a good home. I've noticed a lot of ladies, with their mothering instincts, like anything that suggests eagerness. They get that from hungry babies, and even look for it in inanimate objects, especially if they're cute. I've been exploiting their weakness for years, always looking for a way of making these bunnies more babyish, cuter, and eager.

Some of the gals coming through, though, didn't seem to have the mothering instinct, being more concerned about price than what they could do for these little orphans. But I anticipated them, and put prices by the little guys. A strict $5 apiece or 2 for $9, a dollar discount. I hate giving up that dollar, but some of our less instinctual people need the extra push. Cheapskates.

11:30 came and went -- the dog days of any craft sale -- when people are thinking about eating and not as apt to be wanting our junk. You see it on the faces of fellow crafters. The fans come out, they're rolling their eyes, and bitching about the shopping center. Which isn't slow to take our fees but isn't so quick to address our grievances, like why we have to be parked by 8-10 empty stores. It'd make more sense to put us in a couple of the empty stores closer to the main traffic. But hey, that's insider stuff.

Anyway, here's the real news. This guy -- someone recognized him and said he was a billionaire -- came in with his people, and was enthusiastic about what he saw. There was one lady with a clipboard, a guy with a briefcase full of money, and several bodyguards. The billionaire himself, a good looking guy with a friendly face, a little older than me (62), appeared from the middle of the group.

He had a good word and a handshake for everyone, and assured us he wanted to buy everything we had! I didn't know how that'd go, but it was easy. We simply stated our price and the lady with the clipboard wrote it down and the other guy paid us. No haggling, no nothing, although the clipboard lady, obviously, if left to herself, would've been tighter. The billionaire had places to be, money to make.

He came over and was admiring my stock, commenting on how cute the bunnies are, and even engaged me in some shop talk. On my color scheme, why I chose pinkish ears for them. I explained I thought it was a pleasant color for ears, then started into a more indepth explanation on the psychology of appealing both to children and mothering-type women, when he waved me off with a laugh, also shaking my hand boisterously and saying, "All that's inside baseball, over my head; I'm just looking for nice things!" That really did something for my ego, to think I was smarter than a billionaire!

The key thing, beyond the pleasantness of this encounter, was I got an amazing $2,000 for around $400 of inventory. In one swift transaction, no fuss, no muss. And the same thing went for the others. The billionaire didn't care. One of his people also passed out coupons from the downtown coffee shop for free lattes. It was win-win all around.

This was easily the best craft sale I've ever set up for. It made up for a lot of dismal Easter sales out there, that's for sure! Giving me money to burn ... I'll save some of it for my golden years, probably.

Posted by dbkundalini at 6:33 PM