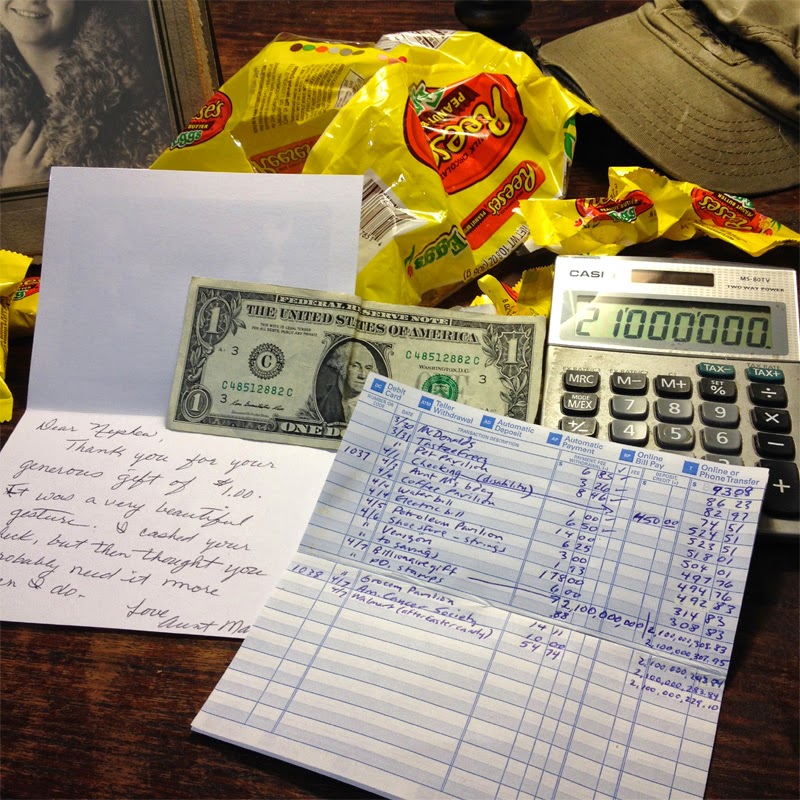 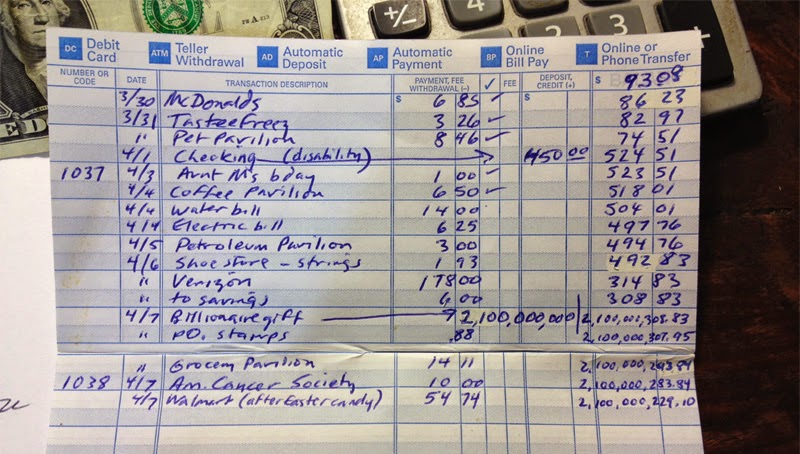 I'm now a billionaire! Isn't that great? I can barely believe it. Me, the last several years bringing in $450 disability for a game toe, and taking anything my relatives could spare -- which wasn't much. Now I have $2.1 billion to my credit!

Let me try something here. I'm working my hand into my armpit and trying to type at the same time, as I blast a rather unpleasant noise in the general direction of my bank, who'd never in a million years loan me a measly thousand bucks for expenses. Oh, hell no! The last guy slammed the door in my face. With a tour group coming out of the vault that day, too, which didn't do much for my ego, having 35 sightseers see me cry, and the banker pointing his stern finger rigidly to the door. "And stay out!" were his exact words.

What a rags to riches story I've got going! Of course it's all thanks to the billionaire. He comes to town, events conspired to throw us together, we become fast friends, and next thing he comes out and offers me a couple billion dollars. Hope you're not jealous.

Probably the weirdest thing is I could've had so much more. He said he wanted to make my life more comfortable and I should tell him how much it'd take. You have to agree, it sounds like the sky's the limit. $30 billion? $50 billion? Whatever I wanted! But I said, No, I'm not going for billions upon billions of dollars; that kind of money could only get me in trouble. You hear of some extremely rich guy, his relatives get kidnapped, and the kidnappers start sending pieces of their ear, etc., demanding a big ransom. And the only thing worse than relatives visiting me would have to be their body parts showing up unannounced.

So when I gave my answer I narrowed it down to a very modest figure, specifically $2.1 billion. That's all I wanted. I reasoned it out like this: $1.1 billion would be plenty. It'd give me 100 million to live on, not touching the first billion, making me perpetually a billionaire. But then I thought, it'll be burning a hole in my pocket in no time. And I want enough to spend that once it's spent I'll still be a billionaire.

That's part of the reason, with the rest being, I simply want to keep some modesty and humility in my life. If I'm walking around with $50 billion, I can see myself getting a big head. "Ha ha ha, I'm better than you, because I have $50 billion!" To me, that's no way to live. Now, though, with $2.1 billion, if I'm ever stupid enough to boast, all they have to say is, "Yeah, but it's only $2.1 billion. Look at Warren Buffet, he's got lots more."

It's always some damned thing. I need to Google what other billionaires do? I'm asking. Or ... just wait and ask the billionaire tomorrow.
Posted by dbkundalini at 7:57 PM