Criminal Turf -- The Lay Of The Land 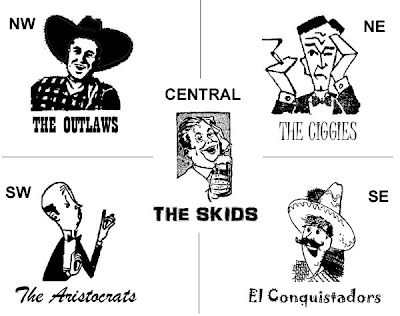 This is the map I've got in mind. Nothing but this. I'm living, eating, and sleeping this map. I'm trying! I'm sweating it out, studying it, going over it again and again, memorizing it, committing it to memory, trying to let it take up an enduring domicile in my memory cells, anything, just so I master it. Good grief, you would too! Because my future as a successful criminal, maybe the greatest criminal this town's ever seen, depends on this knowledge, and I must not let myself down. Must go over it again!

The town, if I'm reading the map correctly, appears to be divided up into five territories, or what they call "turf." Five different turf, or is it turfs? Whichever, I've got to review it for my own benefit, lest everything I've mastered thus far slips. And just like schoolwork, it's hard to remember without looking. I'll try a mnemonic. The west side has two gangs that both start with vowels, O and A. The Outlaws and the Aristocrats, north and south, respectively. The east side also has two gangs, but they both start with C. The Ciggies and El Conquistadors. Then, I'll think of it like a nipple, there's my own gang in the middle, The Skids, our headquarters being the Skidrow district of town, and our turf the Central section. Like a nipple, that's great! Too bad the town isn't round!

OK, I just looked at the map for 10 minutes straight. My mind only wandered off to nipples like two minutes out of 10. Other than that, great focus. The Outlaws: They're not that hard to remember. Just think of cowboys being out west. And reaching for their gun from the top. But there's no precedent for Aristocrats being on the bottom. And that's killing me. That little butler dude, or maybe he's the effeminate "master" of the house, would he be on the bottom? Maybe so. His wife probably tells him when to get up and which shorts to wear! He looks like the type! But I can't think that way. He's just a symbol for a murderous gang.

Now, looking to the east. El Conquistadors, which is a real mouthful, and too bad they didn't come up with a simpler name, they're what you call your Ethnics, folks of a different division of the human species, not quite normal. Unfortunately, they're also into crime, so they've carved out their own turf. I'm going to memorize them for sure, believe me, because I've suddenly got a desire to take them out first. That turf would look great under my own belt. My house is actually in that area, and if I can't annex, dominate, and exploit my own side of town, then I may as well hang it up. I'll send them packing back to whatever land they came from, down south somewhere. Wow, thinking about it like that, I've already got the El Conquistadors part of the map memorized!

It's the others I have to work harder on, since I haven't got that personal a stake in it. The Ciggies up north. Of course they also start with C, which only gets me so far. The industrial section of town is in their area, so if I associate smokestacks with cigarette smoke, that's probably the memory device that will help me get it down. Big smoke, little smoke. I'll put it in Freudian terms, they've got these big phallic things sticking up from their turf. And they go around with little phallic things hanging from their mouth. Sucking and blowing, blowing and sucking. Now that I think of it, I think I met a Ciggie gang member in a restroom the other day. He said he was going to roll his cigarette in the bathroom because it was cold out! He had a big can of tobacco, then he licked the paper and rolled it. So he's into licking as well as sucking and blowing. These guys may be worth keeping an eye on.

I'm reviewing. I think I about have it. Central, that's me, the nipple area, the aureole district. The Old West, where the Outlaws always are. Aristocrats, they're the other vowel, with an effeminate butler dude on the bottom in his relationships. Conquistadors are known for living down south. And Ciggies and smokestacks go together. So it's O, A // S // C, C.

If I can't get this firmly in mind, I don't see any hope for survival.
Posted by dbkundalini at 7:07 AM