Dressing Down The Uniformly Dressed 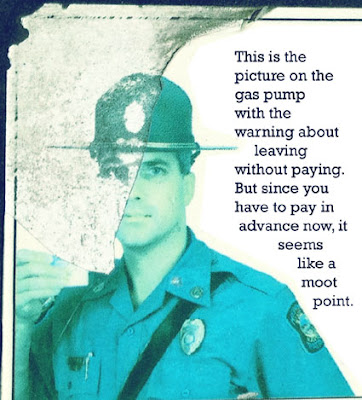 I like to dress down people in uniforms. Not to their face, of course, only when we're not together. If I'm there with them, I'm properly respectful, all the while thinking, "[Grumbling] You dirty rotten...."

I might clarify, I don't have anything against them, and I don't really grumble, "You dirty rotten...." I know people have to have certain uniforms to do certain jobs, and even agree it's helpful. If you're doing the job of a policeman, it's helpful to the public to be able to see your uniform.

Still, just to take the example of the police, how corny their uniforms are! Yet they still wear them with such pride, all the way down to keeping their shoes spit shine. I can see myself respecting the reflective officer who stays nicely uniformed in the office but pulls his shirt out of his pants when he's in public and wears tennis shoes. With his badge moved from the side to the center of his chest, like Superman. Or with his shirt open and his chest hair hanging out.

I was reminded of this the other day while driving out of state. I noticed they were out in force, solving the low-hanging fruit of crime, speeding offenses. Although this one guy went by me like I was sitting still -- I was going 70 -- and there wasn't an officer in sight. The only ones I saw were on the other side of the median. I just happened to see one guy pulled over right now, as it was happening. And I saw one who was already pulled over, with the officer strolling to the car and getting to the window.

So there he is, strolling to the car and getting to the window. And what do I notice? His uniform! So proud of his corny looking uniform! I pictured myself as the offended motorist who was pulled over, dressing down the guy (although of course I'd never actually do that. When you're pulled over, which frankly doesn't happen to me, you have to kiss butt.)

But in one's imagination: "Excuse me, officer, why do you wear that strange looking hat? What are you, a Canadian Mountie wanna-be, or do you tastes run more toward Smokey the Bear? Let's take a look at the secondary badge on your hat. Hmm, right in the middle, such predictable symmetry!" Then I'd move down to the cliche blue shirt, "So you went with the standard blue shirt, how typical ... and boring. And that brown strap across your chest, I assume that's something for your holster. It certainly can't be for looks! Because it looks ridiculous. And how about those meticulously polished, ridiculously shiny shoes! To me, shoes are like photos, I want matte, not glossy!"

And I have one more complaint about the pants. What is it about the typical patrolman's stride? Is there a regulation corncob built in the seat of their pants, inside? Know what I mean? They walk like it. They come sashaying up in a subdued Frankenstein gait. Whipping out their old fashioned ticket book. They never have their place marked. They always have to thumb through it to find the next available page. Real high tech stuff! Nutso stuff! This is what our tax dollars are buying: dorky old ticket books!

Cops are human beings. They're turned off by criticism, I'm sure of it. That's why it never pays to criticize them. Personally, I'd hate to be a patrolman. I think they'd feel like such hypocrites for giving people tickets for stuff they themselves have done. But somebody's gotta do it. The city, county, and state need the money. And as long as they're not pulling me over -- since I never do anything wrong -- I can live with it.
Posted by dbkundalini at 9:55 PM