I Always Bring It 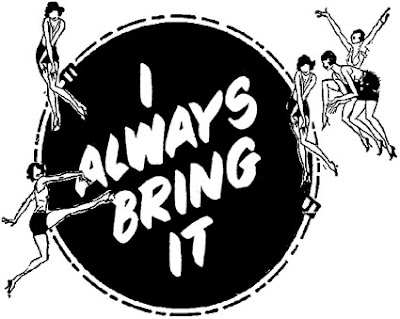 In addition to my instincts being spot on, I'm always able to bring it. Which I'm very happy for.

It stands to reason that bringing it would have to be the next step. It's the same as delivering on your potential. It'd be vain to be able to do XYZ -- with spot on instincts -- if you somehow failed to bring it. It'd be like a delivery truck that never left the warehouse, the epitome of worthlessness.

That's not to say that sometimes I don't debate with myself exactly how I'm going to bring it. Sometimes, frankly, I don't know. Then other times, my ability to bring it is immediate and without hesitation. Of course I love those occasions, even if, honestly, sometimes afterward there's a letdown. Whereas, on those occasions where bringing it is not immediate, afterward I feel more a sense of relief than a letdown. The key thing is, whether it's immediate or with some strained labor, I always somehow manage to bring it.

I was watching a team practice their sport tonight. I wasn't watching it closely enough to know what the sport was, because I only saw it out of the corner of my eye as I drove by. But it was a mix of women and men, practicing some kind of field sport -- it might've been soccer, field hockey, lacrosse, rugby, or even football; there weren't any horses so it couldn't have been polo. In those seconds as I drove by, I wondered, "Are they bringing it?"

And if I'm being totally honest about it, I also started thinking about what they might do after practice, as sweaty bodies and raging hormones can make an interesting situation. My thoughts ran wild -- I probably should leave this part out -- and I started picturing how it'd be if they were to motion me over and attack me. It's something that might happen to Hugh Hefner, but to the rest of us ... not as often. Had that occurred, certainly I would've learned by now what their sport was, and whether they could bring it. But I drove on, alas, without noteworthy incident. I'm sure I could've brought it!

Part of the ability to bring it in a confident way is established through past success. Sometimes I review my past accomplishments and it keeps me certain that I'm going to keep bringing it. So I always know, until senility strikes, I'm likely to succeed. Again, it's not happening in a vacuum. Not only is there the past success, but the spot on instincts are working themselves out in a natural, profitable way.

What does all this mean to you? Maybe you can look to my example for your own confidence and abilities. We're not so different, you and I. Except no one had to tell me how it was done. I never had to stand on someone else's shoulders. I simply had the drive, the spot on instincts, and the ability to bring it merely followed. But that's not to say that you, with a little secondhand knowledge and a boost up, can't also attain part of that, perhaps, if you believe it can be done, maybe. Just tell yourself, "Stranger things have happened."