I was out of state a couple days and needed to stay in a couple of motels. Which is always an adventure, since you never know what you're going to get. But one thing you can pretty much count on is there's always going to be something wrong.

The first one wasn't bad. Really, I can't think of anything wrong with it now off the top of my head. I checked in, they had a luggage cart with a tire that was almost flat. And when I checked out the next day the motel staff was using it -- and complaining about the tire -- so I had to carry my luggage back to the car.

In between those two times was my stay, which was comfortable enough. I should say, I guess, that the pillows were extremely out of my comfort zone. Too mushy and flat just to use one, but too bulky to use two, meaning I used only one folded, which also wasn't comfortable. So I guess I do have some complaints. But other than the cart and the pillow, I can't think of much wrong. And it was my own fault for not taking my own pillows, since I've had that problem lots of times.

The next night the second motel had a few more problems, causing me to reflect on how hard it must be to run a motel. The number one problem was that there weren't enough electrical outlets. The room, apart from the bathroom sink area, had one main electrical block that was accessible. And in that they had gang-plugged the coffee pot, the refrigerator, the TV, the cable box, and the lamp. The cable box had a bigger plug, that could only be wedged in crooked. There's was nowhere to plug in my computer.

As to the alarm clock and light by the bed, the outlet in for those was somewhere under the bed, inaccessible unless you moved the bottom springs. That left the outlet over by the bathroom sink, meaning I had to carry the table across the room to have a place to put my computer. Not an ideal set up! 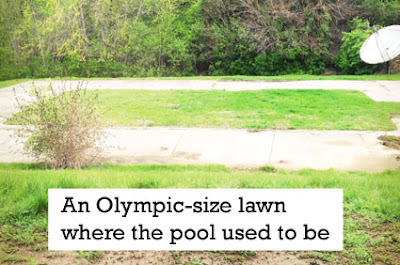 Apparently 40 years ago when they built the basic motel they figured no one would ever need electricity. So that's Challenge Number 1 for the motel operator. Because no one is going to willingly check in there if they know about the problem.

Among the other problems: No luggage cart, a filled-in ex-swimming pool, a weird perfume smell when I got to the room, and the fact that someone from the staff, probably in error, tried to get into my room. I had the deadbolt thing on, but it's still a shock when someone's fidgeting with the door, then opening it! I cried out, "What are you doing!?" and heard a muffled, "Sorry about that." It was still early.

It seems like it'd be hard to run a motel. All those rooms and all those things that can go wrong! It'd be expensive after a while. But it also costs a lot in the long run if you don't keep up. Such as having electrical outlets. Because my obvious resolution to myself is, I'll never stay there again!
Posted by dbkundalini at 9:42 AM