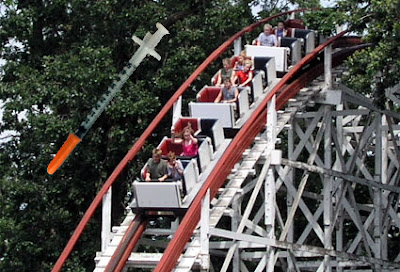 I agree with the Reese's ad, chocolate and peanut butter are two great things that go great together. I can't even imagine one without the other. Although I do like them separately, too. A few other great things that go great together includes wood and toothpicks, stainless steel and table knives, and cotton candy and sugar. You have one, you're naturally going to seek out the other. It's a matter of satisfying a craving.

But there's two other things that definitely don't go great together, roller coasters and syringes. In my opinion, the two have no business being involved in the affairs of the other.

The whole thing came to my attention some years ago, and I've seen it several times since, when I was at an amusement park. I was in line to get on the roller coaster, and there was a lady next to me who wanted to do her insulin shot. It just so happened that at that very second we were at the front of the line. So there she was, fiddling with a syringe and a little vial of liquid, wondering what to do. We got on and she was still debating, wasting precious seconds when she could've been taking the shot. She was just about to do it, then, when the roller coaster lurched forward.

OK, so there we go, and she had the syringe out, and was very conflicted. She was raising her shirt, exposing her belly, then covering it again. Finally, she thought, she'd go for it. Which was a disaster. Just as she was about to give herself the shot, the roller coaster bumped violently side to side, going around a sharp corner, which turned out to indeed be a sharp corner for her. The syringe was jabbing every which way but loose, not being embedded in her flesh long enough to actually release the insulin, then it was back out. Had to hurt.

It went on like that for most of the ride. (These rides are always exactly 48 seconds long, but with an exposed weapon and no way to get off, it seemed longer.) There she was. The first corner wasn't the worst. A bunch of terrible corners were coming up. At one corner, not only did she jab her leg and pull the syringe out just as quickly, but the vial went flying.

I don't know why, but corners on roller coasters always get worse the farther you go. We went down a steep hill and then we started left but quickly turned right. This time the syringe went backwards against one of her legs, depressing the thruster, spraying insulin everywhere, then as we quickly turned right, it went into her other leg, with no juice left. It looked painful, and probably was!

By the time we got to the end, only a few seconds later, she was distressed, mentally and physically. The vial was gone, the syringe was empty; there was nothing but puddles of blood and freshly flayed, hanging skin. It was very unappealing to me.
Posted by dbkundalini at 10:01 AM