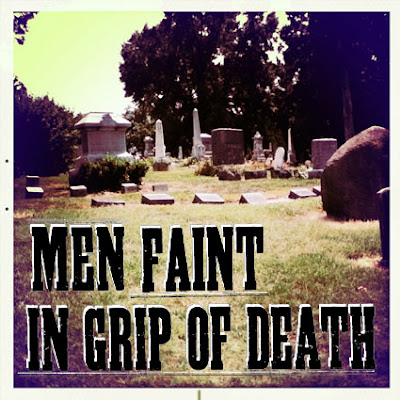 There it is again, another one of those terrible headlines, "Men Faint in Grip of Death." The newspapers blare it out, another one is gone, two more have met their demise, or three have all, each one, met their maker through death.

And we haven't even gotten to the worst part. The worst part is, It could happen to you! I personally have a number of plans for tomorrow, which I will very likely be around to accomplish. Like I usually do when it gets tall, I'll probably mow the grass. I'll be taking the garbage out to the side of the road. And a few things like that, incidental stuff. But it could happen to me! Sudden death could happen, my own senseless end, which is truly unfathomable from the point of view of the normal continuing ego.

But think about it. I'm not that much different from anyone else. And tomorrow, like it or not, there are going to be thousands of people -- 100,000 to 200,000 people, who will croak. Google it! We'll split the difference and say 150,000. 150,000 immortal souls will shed their robe of flesh and ascend into the ether, and be gone. Which means the "Ghost Hunters" show ought to be considered a growth industry. It literally could happen to you!

All those things are ... natural causes. Nature itself, poor, innocent, benign nature ... Mother Nature, even ... is a cold, calculating, heartless serial killer. There's no getting around it! Nature itself is worse than John Wayne Gacy, and all the rest of 'em put together! Yet, what do we like to do? "Go out to nature!" I hear that and it makes me sick. A lady I know does this screwy new age meditation out in "nature," listening to the bubbling creek, the nearly silent flit-flit-flit of butterfly wings, and the "sound of silence" of the passing clouds, not to mention the dulcet warbling of an unseen bird. In my opinion, that's crap.

Another way to look at it, and probably more realistic, is this: You could drown in a bubbling creek, you could open your mouth in wonder and the butterfly could choke you, and the passing clouds could be hiding a tornado. The bird could dive-bomb you and peck your eyes out, leaving you to stagger sightlessly toward home till you fall off a cliff. Then you're dead! And what about the sun? Anyone who's ever crawled halfway across a desert could tell you something about the sun...

The bottom line is, Beware of nature!

Everyday we hear of them, our fellow creatures, who die of "natural causes." And, yes, it sounds so nice. They lived a nice long life, they say, but they don't always speak the rest of it: Nature got them! You can do what you want, that's on you. But as for me, except for what I absolutely have to do tomorrow, like taking out the garbage, I'm staying inside!
Posted by dbkundalini at 6:42 PM