Washington Vs. Lincoln -- The Pregame Show 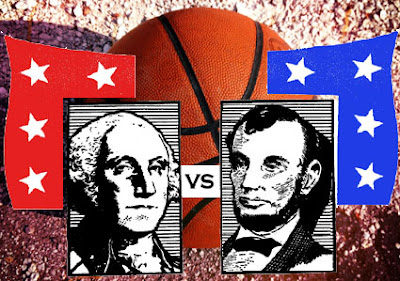 The Big Championship Game was already played, on Sunday, March 25, with Lincoln beating Washington. In the newspaper account of Wednesday, March 28, we learned the score, seeing that the Lincoln hardcourt boys had edged Washington in the cager classic, 56-54. Today, Monday, April 2, we're listening to the pregame show, which of course was recorded before the game but only now is presented, thanks to the miracle of tape delay.

The voices we hear are those of the various announcers, whose identities are not all that important. But they include Bud, Bud, Dick, and Ralph.

-- Both teams will be giving it all they got. They are well aware, you can be sure, that there's no tomorrow for either team. Today, right now, this very minute, is all they have. There's no more days to count. It all comes down to this, the present moment, the eternal now, if you will. If they don't leave it all, everything's they've got, on the floor today, and I mean today, it's not going to make one damned bit of difference tomorrow. You can take it to the bank, it's gonna happen...

-- I'm picking Washington, Ralph, and I'll tell you why. Washington was our first president, and any team that takes that name knows it has to fight like George himself to be Number One. There's no second place for a team called Washington!
-- But of course Washington has lost before, Bud. There's no team in America with an perfectly unbeaten record over the years. They've come in second before, clearly, as you well know, so it could happen again, but I believe I get your point.
-- Exactly, my point is not that they haven't lost before -- even they would admit the obvious truth, not being able to tell a lie. My point is they're going to give it all they've got, not just for the sake of the game, which is big in and of itself, but to bring honor to their name and Washington's primacy.
-- Agreed.

-- Lincoln's looking good this year. And you have to hand it to them, I think they're going to come out ready to play. And I believe with a lot of scrappiness and gettin' on it from the git-go. I can see them throwing Washington off their game. You know, Washington may have the primacy in terms of being the first president -- that's indisputable --, but Lincoln in poll after poll is people's favorite president, hands down. Get me?
--I do, Dick, I get you. It's like this: Washington, being first, never had to live up to someone else's reputation. But Lincoln, coming after, knew he had to be a scrappier president, and get on it from the git-go, if he was going to overtake the previous giant. He started a Civil War, for crying out loud, that's damned scrappy, if you ask me! But that's what he had to do! If you want to fill a giant's shoes, you gotta go for the glory. And I think that's exactly how Lincoln's going to play today.

--Who do I like? I like Zeke Denominator for Washington. He starts down low but divides the crowd and comes out on top. And they've got Kelvin Celsius, whose had the hot hand lately. He's a lot like Denominator. He gets down low and before you know it, rises high to the rim and has the other team sweating it out. And of course Lincoln has Phillip Nozzle. When they put him in and he's pumping shots, Lincoln's miles ahead. And their big man, Wilt Redwood, stands head and shoulders above 'em all, dropping the ball in for quick scores or giving cover to the rest of the team.
-- Don't forget Washington's Abe Lanky, Bud.
-- No, no, of course not!
-- It's a bad name for a Washington man, but it forces the big man to play that much harder, to show he's not a Lincoln plant. I can see him matching Redwood point for point.

-- Everything's set for a great championship. The setting, the rivalry, the atmosphere, it's all just right. We have the Washington Eagles, with their hatchets and cherry tree branches, and the Lincoln Panthers, pushing their angular faces forward with fake beards and tousled, nondescript haircuts. Someone's hopes die today, and course Lincoln's always watching their back. Will Washington remain standing to cross the river of victory? Or will Lincoln leave the building, not in a box, but by the power of their own two feet? Time will tell. The coming together of past, present, and future will tell the whole story. And we already know the outcome in part: One of these two great teams will go down in history for glory, and the other in shame.
Posted by dbkundalini at 10:54 AM