Having Just Eaten A Grilled Steak 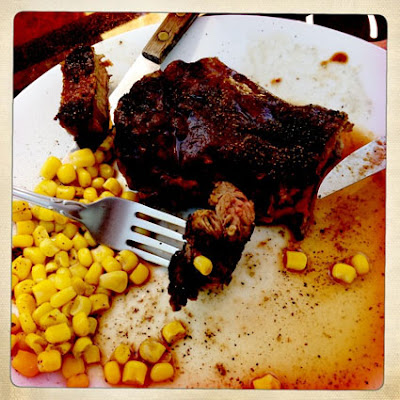 That's what it looked like before I got it all eaten. Now that I've eaten it, who knows what it looks like. Probably not as appetizing!

While it lasted, it was great. And it was fairly thick. Before I grilled it, I started thinking, you know, this might be too red inside, because what I know about grilling ... it's not much. Still, I did my best, cut into it a few times and checked the redness, then when I thought it'd be just right, pulled it off the fire and set it there proudly on my plate.

I started slicing into it, and it was good to my taste buds, very much like what I anticipated. A little A-1 sauce, and ummm-ummm, nice. And I kept going, too, not stopping -- stopping just long enough to take this picture -- till I was done. I should say, I had to quit giving my dog Underbrush food at the veterinarian's orders, since it's killing her, but this was so good, she got three bites. I don't think it'll do her any harm. She had the right of first refusal.

Now, virtually a half hour after the last bite, I'm still feeling pretty good. Although for me eating like that means I start losing my mental sharpness. My mental sharpness goes like this: First thing in the morning, it's 70 miles an hour in a 20 mph zone. Then it steadily loses mph till it's time for lunch. Then with lunch, it's crawling. The only way I'm able to write this post at all is out of simple delirium from such a great lunch.

You know, this is Easter. Going to church was number one of my blessings today, and a close runner-up, number one-B was this steak. The choir was knocking numbers out of the park, the children's message resonated with me (a black jellybean is sinful, a red one is Christ's cleansing blood, the white one is saved), and of course Pastor Wadd had a great resurrection message with his usual anti-fornication tie-in. Then I went to the store and actually ran into a guy from the church, a guy I don't know. I said, "Didn't I see you at my church?" He had some weird response, like, "I was there today," then he was more obscure and mysterious. All I wanted him to say was, "Hey, yeah, how are ya?" So I got my steak and left.

While eating it, I started thinking of one of my old cousins (not a first cousin) who we always called Cousin Beef. True story. The guy could grill like nobody's business. Never talked, just made satisfied eating noises, like I did above, with the ummmms; in fact, when I said it, that's what made me think of Beef. At one of our reunions I tried to talk to him about his cooking. And all he could do was make these noises. His wife had to translate for me, like, "He says, 'Yes, it came out really well.'" That kind of thing. It was all the same noises, maybe with a different stress here or there, and the wife always had the gift of interpretation. Wonder where Beef is -- I really don't know.

So here I sit, about to bust. Blessings and well-cooked beef to each one of you on Easter Sunday! That's a heck of a picture, isn't it? Look at that, I had two knives going! The knife on the right's the one I was checking the beef with while it was cooking, and I also used it to stir the corn. The other knife, even though I had it out for slicing the steak, I didn't use it. I used only the knife on the right.

Quick reading comprehension test: Which knife did I use for eating my steak? What did I do with the other one?
Posted by dbkundalini at 2:50 PM