He Had His Wisdom Nuts Removed 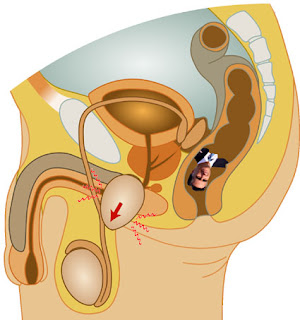 This guy I knew had to have the worst operation a man can imagine. It's what a lot of us fear but have never dealt with, the removal of the wisdom nuts.

They're always up there, like wisdom teeth, but they're usually in a state of quiescence, more or less twiddling their thumbs. The theory is, if there's nothing to trigger them, they're simply dormant your whole life. That's what usually happens. But if triggered, God forbid, their descent means nothing less than certain death, or in milder cases, excruciating pain and embarrassment.

As for dinosaurs, many of our ancestors were the victims of dinosaur attacks. They'd be climbing a tree to escape and a dinosaur would bite off their nuts. Then, if they somehow made it to safety, their wisdom nuts would descend, of course not knowing there was no sac to hold them, as nature had somehow neglected to create a wisdom version of the scrotum.

So what happened to my friend? He told me not to tell anyone, but since no one reads my blog anyway, I guess I can say it. He was fired from his job about six months ago, and he's been scraping by with barely any cash. So he had to move back in with his mom. It's a bad situation. OK, here's the thing: He got his old room back, OK? Which just happened to have his old dinosaur wallpaper from the '90s. And his mom's a rather large woman, so I'll leave it to you to figure out his fantasy life...

Anyway, he noticed some uncomfortable shifting, some painful movement of a tectonic nature down there, and next thing he knew he was writhing in agony. They got him to the hospital, and the tests showed he had a serious problem, his wisdom nuts had to come out!

(Plus, I'm not a doctor by any stretch of the imagination, but looking at the picture, it looks like he's having trouble passing a Mitt Romney-shaped turd. The Republicans have the same complaint, but they're looking on the bright side: "He may be a turd, but at least he's white!")

So what's the main problem with wisdom nuts? There's not really a good place for them to be in the human anatomy as it's presently arranged. And they don't have a dedicated path down. So they just plow through whatever tissue happens to be in the way, causing terrific pain. Again, look at the picture. That's three lines of radiating pain on each side, extremely hard to endure.

Let my friend's trouble serve as a lesson for you: Mom and Barney don't mix.
Posted by dbkundalini at 4:46 PM